BERLIN — The coming decade will be a hopeful one if the people of Germany come together to fight climate change, support development in Africa, and thwart hate and anti-Semitism at home, Chancellor Angela Merkel told her nation on Tuesday in her 15th annual New Year’s speech.

“The ’20s can be good years,” she said. “Let’s surprise ourselves once again with what we can do.”

While many in the country saw a strong youth protest movement as a hopeful sign and a slowdown in the arrival of new refugees to the country as the defusing of a crisis, 2019 was a difficult year for Germany. It brought the rise of far-right extremism, a slowing economy and an increasingly fraught relationship with major trading partners, including the United States.

And overarching all of that is the threat of climate change, with Germany experiencing record-breaking temperatures and extreme droughts, floods and snowstorms in the past decade.

“I, as a 65-year-old, will not personally experience all of the consequences that climate change will bring if politicians do not act,” Ms. Merkel said in her roughly five-minute speech, adding that coming generations would “live with the consequences of what we do or fail to do today.”

Many of those younger people have been skipping school to stage mass protests in Berlin and other German cities since 2018, calling for action on climate change.

In her speech, the chancellor referred to recently passed laws designed to help decrease Germany’s carbon emissions— regulations that many have criticized as being too weak, but which Ms. Merkel says lay the framework needed to take effective environmental action.

“We need, now more than ever, the courage to think in new ways, the strength to leave well-trodden paths, the readiness to venture into new territory and the resolve to act more quickly,” she said, adding that it was essential to do so “if a good life on this planet is to be possible for today’s young people and those who come after them.”

“We need, now more than ever, the courage to think in new ways, the strength to leave well-trodden paths, the readiness to venture into new territory and the resolve to act more quickly,” she said, adding that it was essential to do so “if a good life on this planet is to be possible for today’s young people and those who come after them.” 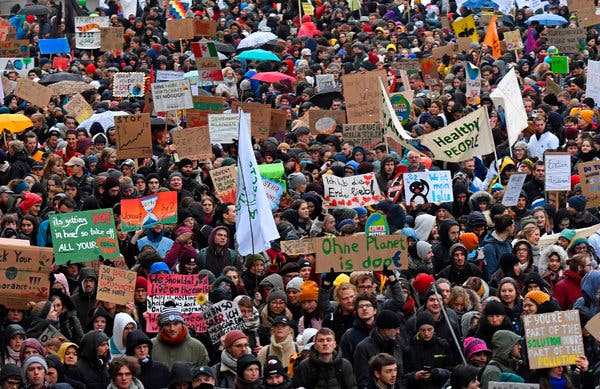 Thousands of demonstrators attended a “Fridays for Future” climate protest in Leipzig in November.Credit…Jens Meyer/Associated Press

It is unclear how many viewers tune in to watch the chancellor’s New Year’s speech and receive her New Year’s wishes — which was once a tradition in many households — given competing traditions on a day widely and exuberantly celebrated by Germans. Last year, three million households watched the first televised version on the host broadcaster.

Tuesday’s New Year’s address by Ms. Merkel may be her last. Although she has repeatedly vowed to stay in office until the next scheduled election, in 2021, her coalition government is unpopular, and pundits have been discussing her early exit since she announced in 2018 that she would not run for re-election.

She used the speech as an opportunity to emphasize the importance of public safety and the safety of local politicians, at a time when far-right and hate-filled crimes have shaken Germany. In June, a state politician was murdered on his front porch by a far-right extremist. And in October, an armed man tried to enter a synagogue in the eastern city of Halle, in an anti-Semitic and racially motivated attack in which he killed two people.

“Protecting them — like all people in our country — from hatred, hostility and violence, from racism and anti-Semitism, is the duty of the state, and it is a duty to which the federal government has a particular commitment,” Ms. Merkel said. 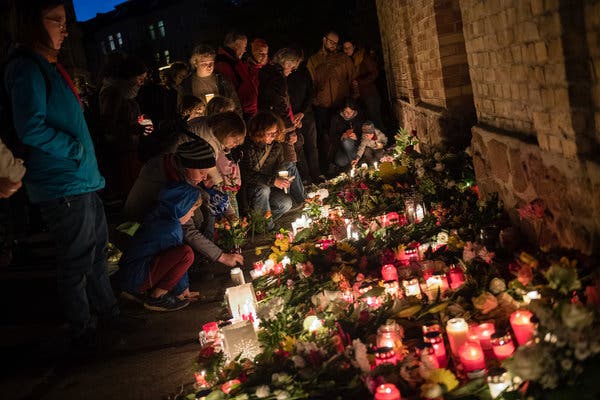 A memorial for those killed near a synagogue in Halle in October.Credit…Jens Schlueter/Getty Images

Ms. Merkel also said it was essential to work with African nations where people are experiencing hardship and turmoil, so that they can prosper there rather than turning to Europe’s shores in desperation.

“Cooperation with Africa lies in our own interests,” she said, “for only when people have the chance to live in peace and safety will flight and migration be reduced.”

Such public addresses by German leaders, comparable to the State of the Union address in America or President Franklin D. Roosevelt’s fireside chats, have their roots in the era of the Kaiser around the turn of the 20th century and were first televised in the 1950s.

In its postwar history, the New Year’s speech has not always gone without a glitch. On Dec. 31, 1986, the public broadcaster accidentally replayed Chancellor Helmut Kohl’s speech from the previous year, in an apparent case of human error, although supporters of Mr. Kohl charged that it was an act of political sabotage.

Sources from: The New York Times