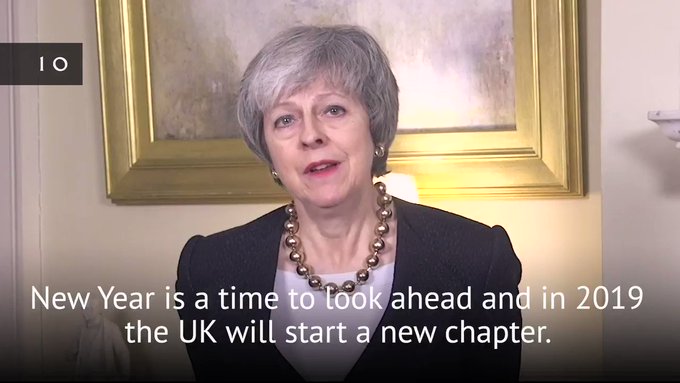 Theresa May has urged the Commons to allow the UK to “turn a corner” by voting for her Brexit deal, using her new year’s message to keep up the pressure on MPs ahead of the rescheduled vote on her plans.

The appeal came after the prime minister apparently failed to win any concessions from a round of phone calls with EU leaders over the Christmas period, with Downing Street saying there was still more work to do to win reassurance for MPs over the Irish backstop plans.

In a video message released late on New Year’s Eve, May said that after the divisiveness of the Brexit referendum and its aftermath she wanted 2019 to be “the year we put our differences aside and move forward together”.

She said: “New year is a time to look ahead and in 2019 the UK will start a new chapter. The Brexit deal I have negotiated delivers on the vote of the British people and in the next few weeks MPs will have an important decision to make. If parliament backs a deal, Britain can turn a corner.”

MPs will resume debating May’s proposed Brexit deal on 9 January, with the vote due to take place the following week. It had been scheduled for December, but the prime minister postponed it at the last minute, amid near-unanimous expectations that she would lose heavily.

She delayed the vote to placate MPs by seeking what Downing Street calls “legal and political assurances” over the deal, notably on the backstop arrangement for the Irish border.

The backstop, which would keep Northern Ireland in elements of the single market and customs union if no permanent trade arrangement is reached to avoid a hard Irish border, is heavily disliked by May’s DUP allies, as well as a number of Brexit-backing Conservative MPs.

The backstop, which would keep Northern Ireland in elements of the single market and customs union if no permanent trade arrangement is reached to avoid a hard Irish border, is heavily disliked by May’s DUP allies, as well as a number of Brexit-backing Conservative MPs.

They are concerned that the UK would not be able unilaterally to pull out of the arrangement, an issue on which the EU is refusing to budge. May has hoped to gain assurances that the backstop is unlikely to come into force.

May had been in contact with EU leaders over Christmas to try to seek the necessary reassurances, Downing Street said.

“She has been in contact with European counterparts over the break, and you can expect more of that to continue over the week,” the prime minister’s spokeswoman said. “I haven’t got a list for you, but she has been in touch with European leaders, and that will continue in the lead-up to the vote.”

The new talks, however, had not yet led to a solution, May’s spokeswoman said: “There’s still more work to do. The PM is absolutely focused on doing that in the lead-up to the vote itself. The UK team, at official level, are in contact with their counterparts in the EU technical level. Her focus is on getting the assurances MPs want ahead of that vote taking place.”

Asked if the prime minister was confident of success, given that the resumption of the Commons debate begins in little more than a week, the spokeswoman said: “That is what she is focused on, yes.”

May’s was the last among a series of new year messages released by party leaders. Jeremy Corbyn used his to accuse May of plunging the country into crisis, saying her Brexit plans were “letting people down all across the country, whether they voted leave or remain”.

In his message, the Liberal Democrat leader, Vince Cable, said there were now “90 days to change the course of this country” over Brexit. He said: “The history books will look back on the coming three months as critical.”

There will be no cabinet this week, so ministers will next convene on 8 January, a day before the start of the rescheduled Brexit debate. May will hope to persuade the DUP and potential Tory rebels to back her plan, arguing that if it is blocked, Brexit might not happen.

Andrea Leadsom, the Brexit-backing leader of the House of Commons, wrote in the Daily Mail that MPs would be “undermining our democracy” if they voted down Mrs May’s deal. “The people spoke in 2016 and parliament must deliver,” Leadsom wrote.

“I hope we can all come together in the national interest to back this deal. The country wants us to get on with it, and I look forward to voting to do just that.”

One leading Conservative malcontent, John Redwood, was knighted in the New Year honours list, prompting accusations of desperate tactics by No 10. He has since said the knighthood will make no difference to his vote.

Downing Street has also sought to exert pressure on remain-leaning MPs by insisting that a no-deal departure from the EU is the alternative to her proposal, and ramping up contingency planning for this scenario.

This has included spending more than £100m to charter ferries to ease severe congestion at Dover in the event of a no-deal Brexit. It has emerged that one of the companies contracted, Seaborne Freight, does not own any ships, has not previously operated a ferry service and is not planning to do so until late March.

By Peter Walker and agencies @peterwalker99

Sources from: The Guardian

Tips: According to the prediction of CWMALLS Weather, 2018 winter of Northern Hemisphere (especially in European region and North American region) will be much colder than previous years, the situation in the movie The Day After Tomorrow might happen, hope everyone (especially the middle-aged and elderly people with diseases like cardiovascular disease, arthritis, scapulohumeral periarthritis, etc., and friends who live in cold areas, high altitude areas and extremely cold areas) to prepare for keeping out the cold! Scientific and reasonable prevention makes life become easier and more wonderful! Thanks! —— CWMALLS® Patented Multifunctional Jacket & Coat