(CNN)One of the Earth’s longest-flying spacecraft has detected a “persistent hum” beyond our solar system, according to a new study.

NASA’s Voyager 1 launched on September 5 1977, from Cape Canaveral, Florida, aboard a Titan-Centaur rocket, just weeks after its sister craft, Voyager 2. Although they were initially designed to last five years, more than 43 years after they launched, the crafts are still sending back data as they explore interstellar space.
Instruments aboard Voyager 1, which has moved past the edge of the solar system, through the solar system’s border with interstellar space, known as the heliopause, and into the interstellar medium, have detected the sounds of plasma waves, according to research published Monday in the journal Nature Astronomy.
A Cornell University-led team studied data transmitted from the spacecraft, sent from 14 billion miles away and discovered the interstellar gas emissions. 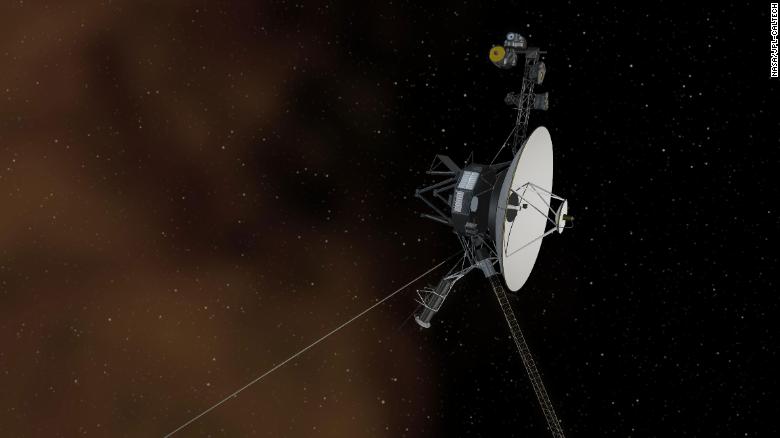 This artist’s illustration depicts NASA’s Voyager 1 spacecraft entering interstellar space.
“It’s very faint and monotone, because it is in a narrow frequency bandwidth,” Stella Koch Ocker, a Cornell University doctoral student in astronomy, said in a statement. “We’re detecting the faint, persistent hum of interstellar gas.”
NASA’s Voyager 1 spacecraft flew by Jupiter in 1979, and by Saturn in 1980, before crossing the heliopause in August 2012.
After entering interstellar space, Voyager 1’s Plasma Wave System instrument detected oscillations in the gas, which is caused by our sun. But researchers also noticed that in between those eruptions, there was a steady and persistent signature.
Listen to the eerie sound here.
“The interstellar medium is like a quiet or gentle rain,” James Cordes, the George Feldstein Professor of Astronomy at Cornell and senior author of the study, said in a statement. 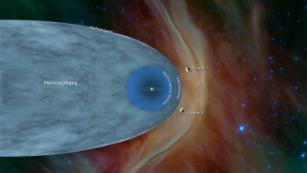 What Voyager 2 has learned since entering interstellar space
“In the case of a solar outburst, it’s like detecting a lightning burst in a thunderstorm and then it’s back to a gentle rain.”
Researchers think there is more low-level activity in the interstellar gas than was previously believed. This will allow researchers to monitor the spatial distribution of plasma. Voyager 1’s data can also help scientists understand the interactions between the interstellar medium and the sun’s solar wind, a steady stream of charged particles outflowing from our star.
“We’ve never had a chance to evaluate it. Now we know we don’t need a fortuitous event related to the sun to measure interstellar plasma,” Cornell research scientist Shami Chatterjee added.
“Regardless of what the sun is doing, Voyager is sending back detail,” Chatterjee said.
Voyager 1 is the most distant human-made object in space and continues to function, despite its age and distance.
“Scientifically, this research is quite a feat. It’s a testament to the amazing Voyager spacecraft,” Ocker said. “It’s the engineering gift to science that keeps on giving.”
Sign up for CNN’s Wonder Theory science newsletter. Explore the universe with news on fascinating discoveries, scientific advancements and more.