(CNN)The final full week of Donald Trump’s presidency ended with a nation in disarray — fearful about the threats surrounding Inauguration Day in a capital city that has become a fortress; unsettled by new details of the harm that rioters could have inflicted on lawmakers during last week’s insurrection; and angry at the revelation that the administration’s pledge to release a reserve of Covid-19 vaccine doses was hollow.

In the midst of those grave security threats and the frustrating news that there is no such vaccine reserve, the President was still conspicuously missing in action at the White House Friday. It was Vice President Mike Pence who was seen doing the work normally required of a commander-in-chief — from visiting the National Guard troops guarding the Capitol to making the long-delayed phone call to Vice President-elect Kamala Harris to offer assistance in the presidential transition. 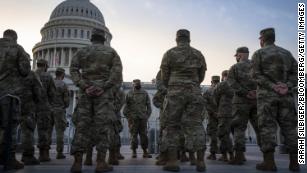 Terrifying scope of Capitol attack becoming clearer as Washington locks down for Biden’s inauguration
The President met on Friday with MyPillow CEO Mike Lindell, who was captured by a Washington Post photographer outside the West Wing carrying notes with references to the lie that the election was stolen and the possible implementation of martial law — which Trump has discussed while indulging his fantasy that he could overturn the election. Trump also drilled his staff about the 20 House Republicans who voted to impeach him this week, inquiring about whether they could be challenged during the midterm primaries in 2022, according to CNN’s Jim Acosta.
Trump’s narcissistic detachment from the grief and fear gripping the nation, while all too familiar, was no less breathtaking in his final days after four years in which he has shirked the most solemn duties of the presidency. After these last days characterized by incompetence, poor planning, negligence and Trump’s utter lack of contrition for the mob he incited to attack the Capitol, America finally seems ready to see him head for the exits.
His political capital has cratered. A Pew Research Center poll released Friday showed that 54% of Americans want to see Trump removed from office and 68% said they don’t want to see him continue to be a major national political figure in the years to come. His overall approval rating fell to 29%, the lowest it has ebbed during his presidency in the Pew poll.

As Trump makes little effort to quiet the nerves of a rattled nation, details of what unfolded during last week’s Capitol siege have become more unsettling by the day as federal authorities have raced to apprehend the most dangerous rioters while warning of plots for more violence next week when President-elect Joe Biden will be inaugurated.
Chilling new video shows the threats that rioters hurled at a Black Capitol Police officer as they chased him up the stairs on the Senate side of the US Capitol, while he skillfully diverted them away from the doors of the chamber where lawmakers were huddled in fear for their lives.
The Washington Post was the first to report Friday that Pence and his family were whisked to safety in a nearby room mere seconds before Eugene Goodman led the mob away from some of the nation’s top elected officials to another corridor where other officers arrived as backup. Pence was clearly a top target in the riot; widely circulated video has shown the rioters chanting “hang Mike Pence” as they stormed the Capitol after Trump turned on his vice president by erroneously suggesting that he could have abandoned his duties and changed the outcome of the presidential election. 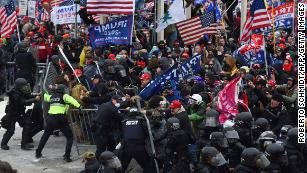 275 cases open in Capitol riot investigation, US prosecutors say
In a new court filing, federal prosecutors said rioter Jacob Anthony Chansley — who was recognizable in pictures because of his face paint, headdress and the six-foot spear that he carried into the Capitol — stood at the dais where Pence had been that morning and then ominously wrote a note that said, “It’s only a matter of time, justice is coming.”
Friday also brought unnerving new accounts from the police officers of the attacks they endured as they faced down the mob. DC Metropolitan Officer Michael Fanone recounted to CNN how rioters grabbed for his gear as he was down on the ground injured after being Tasered several times in the back of the neck.
“Some guys started getting a hold of my gun and they were screaming out, ‘Kill him with his own gun,'” Fanone, an officer for nearly two decades, told CNN.
Officer Daniel Hodges, who was captured on camera during the riot getting crushed by a door as rioters surrounded him, described how a guy ripped off his mask, wrested his baton away and beat him with it.
“He was practically foaming at the mouth so just, these people were true believers in the worst way,” Hodges told CNN.
On Friday, Justice Department prosecutors formally walked back their assertion in a court filing from the day before that said Capitol rioters sought to “capture and assassinate elected officials.”
But authorities continue to investigate hundreds of people in connection with the riot as they try to stave off possible violence next week.
In response to DOJ’s initial assertion, GOP Sen. Ben Sasse of Nebraska called on the American people Friday to pay attention to the dangers that the insurrectionists posed, noting that “rage-peddlers” are trying “to whitewash the attack on the Capitol, saying that a few bad apples got out of control.”
“These men weren’t drunks who got rowdy — they were terrorists attacking this country’s constitutionally-mandated transfer of power,” Sasse said in a statement. “They failed, but they came dangerously close to starting a bloody constitutional crisis. They must be prosecuted to the fullest extent of the law. The FBI is investigating widespread calls for violence across the country and every American has an obligation to lower the temperature.”

Promise of a vaccine reserve evaporates

While Americans are still trying to come to terms with the terrifying attack on their democracy, hopes of quickly stamping out the coronavirus pandemic are fading as governors across the country struggle to get the vaccine to those who need it most, hamstrung by the absence of a national plan, an insufficient number of doses to meet the demand, and a lack of resources from the federal government to distribute it.
Biden outlined his own plan to accelerate distribution of the Covid-19 vaccines on Friday. Though his proposal was short on details, he said he would expand eligibility for those 65 and up to get vaccinated — a step the Trump administration also encouraged this week. He also said his administration would create more sites such as community vaccination centers and mobile vaccination clinics, expand the workforce of health care workers and offer more transparency to states about how many doses they will be receiving.
But several governors said they were furious Friday after learning that the federal government has no reserve of additional Covid-19 vaccine doses to distribute — days after Trump administration officials announced with much fanfare that they planned to release a reserve of second doses to make more vaccine available to those 65 and older.
Washington Gov. Jay Inslee, a Democrat, said on Twitter that governors were told repeatedly by the Department of Health and Human Services that there was “a strategic reserve of vaccines, and this week, the American people were told it’d be released to increase supply of the vaccine.”
“It appears now that no reserve exists. The Trump administration must answer immediately for this deception,” Inslee tweeted. 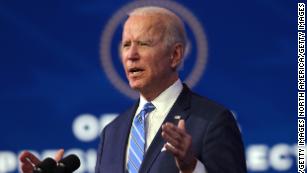 Biden wrests control of Trump’s spotlight and makes first big bet of presidency
During a news conference, Oregon Gov. Kate Brown — also a Democrat — said she was “shocked and appalled” that the Trump administration set an expectation earlier this week, knowing that they could not deliver on it.
“Their empty promises are literally playing with people’s lives,” Brown said. “While the Trump administration pulled the rug out from under us like a cruel joke, let me assure you that Oregon’s priorities, and my priorities have not changed. … I remain committed to vaccinating our seniors quickly. But this failure by the Trump administration will unfortunately cause a two-week delay in beginning vaccinations for seniors quickly.”
Minnesota Gov. Tim Walz, a Democrat, noted at a news conference that he has “been frustrated at times beyond belief” at the Trump administration during the course of the pandemic, but the revelation about the lack of a reserve is “so far beyond the pale” that it is “almost unimaginable,” he said.
“Where did they go?” he said of the doses that were to be held in reserve. “Who is going to be prosecuted for this?”
“I have 2.1 million of you in line, and they gave us 60,000 (vaccine doses),” Walz said Friday. “I can’t go and buy (vaccine doses) somewhere. I can’t beg them from somewhere. I can’t even have them shipped directly to me.”
“It’s a catastrophe — what they’ve done,” he said.
Health and Human Services Secretary Alex Azar — who submitted his resignation letter this week without mentioning the nearly 400,000 US Covid deaths — confirmed in an interview with NBC’s Lester Holt Friday that there is no “reserve stockpile” of doses available to send out.
“We now have enough confidence that our ongoing production will be quality and available to provide the second dose for people, so we’re not sitting on a reserve anymore,” Azar said. “We’ve made that available to the states to order.”
Pfizer has told CNN it has vaccine doses on hand to ship when they are requested by the federal government. “We are working around the clock to produce millions more each day,” the company said in a statement.