(CNN)President Donald Trump’s final sprint to shore up states he won four years ago led him Tuesday into the epicenter of America’s quickening viral surge in Wisconsin, as the state’s record single day spikes in Covid-19 cases and deaths crystalized his administration’s failures that could end his political career.

A week from the night when America could learn the identity of its next President — depending on prolonged mail-in voting counts and possible legal challenges — Trump greeted a crowd, packed together, with few masks worn. He did so as Badger State hospitals are critically understaffed and facing the threat of being overwhelmed by Covid-19 patients. But on a chill fall night, the President wove an alternative reality he bets will win him reelection.
Build your own road to 270 electoral votes with CNN’s interactive map
Trump’s three-state swing Tuesday — he also visited Michigan and Nebraska — reflected the sleight of hand he’s using a week from Election Day, creating a false impression that the pandemic is all but over as it gets worse each day.
“We are turning the corner. We are rounding the curve, we will vanquish the virus,” Trump said in West Salem, Wisconsin, as the US piles up record numbers of new infections that have added half a million new cases in the last week alone. More than 226,000 Americans have died. The current death rate is 800 per day, and experts warn the trend is only increasing ahead of a grim winter.
But in his closing election pitch, Trump is denying the disastrous impact of the gravest challenge facing the country, holding potential superspreader events that put his own supporters and anyone they meet at risk and yet again prioritizing his political survival above his duty to guard public health.
While Trump complained in Wisconsin that all the media talks about is “Covid, Covid, Covid,” the state’s Democratic Gov. Tony Evers warned Tuesday: “There is no way to sugarcoat it, we are facing an urgent crisis and there is an imminent risk to you and your family.”
Andrea Palm, Secretary-designee of Wisconsin’s Department of Health Services, warned: “The increasing cases, and our increase in deaths today are the largest single day increases we’ve seen throughout the course of this pandemic. We must take significant and collective action.”
Public disquiet about the President’s handling of the worst public health crisis in 100 years has contributed to a situation in which Trump appears to be struggling to hang on to states like Wisconsin, which he won in 2016, and is seeking to shore up Michigan, Pennsylvania, North Carolina and Iowa.
With more than 68.5 million Americans having voted so far — surpassing half the total votes four years ago — time is running out to change the dynamics of a race in which he is trailing Democratic nominee Joe Biden in key battlegrounds.
Yet Trump, drawing energy from his crowds, seemed upbeat Tuesday, predicting a “great red wave,” slamming polls and promising an even bigger Electoral College upset than in 2016. He blasted pundits who said back then “‘he can’t get to 270’ — and they were right — We got to 306.”
If Trump wins next week in another upset, it will suggest that enough voters think his cultural connection with the US heartland and nationalist approach is more important than his downplaying of the worst domestic crisis since World War II and his daily flurry of lies. He will have made good on his vow to find millions of new Trump voters who escaped pollsters. Still, there is so far no sign in national or state polls that the President is building the kind of late momentum that drove his shock win over Hillary Clinton.

Biden goes on the offensive 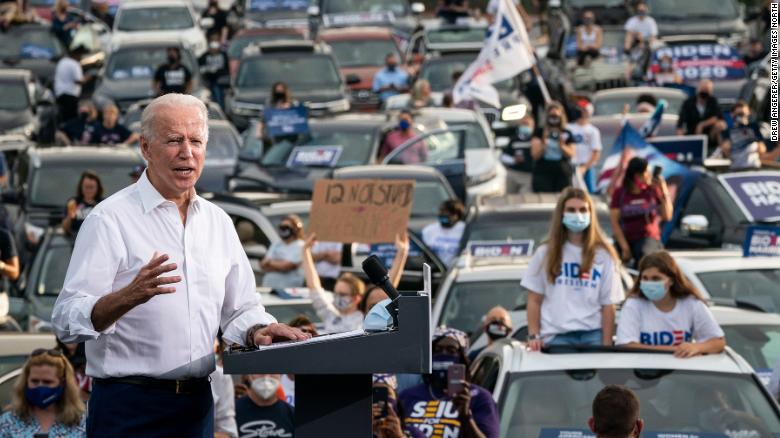 Democratic presidential nominee Joe Biden speaks during a drive-in campaign rally in the parking lot of Cellairis Ampitheatre on October 27, 2020 in Atlanta, Georgia. Biden is campaigning in Georgia on Tuesday, with scheduled stops in Atlanta and Warm Springs.
Biden’s travel is telling the story of a Democratic campaign that believes that it has more routes to 270 electoral votes than the President. The former vice president pledged to heal a sick and divided nation in symbolic surroundings in the spa town of Warm Springs, Georgia, where President Franklin Roosevelt, who guided the country through earlier crisis, once sought relief from paralysis caused by polio.
“Many wonder, has it gone too far?” Biden asked in a state Democrats have not won since Bill Clinton carried it in 1992 but think could be in play this year.
“Have we passed the point of no return? Has the heart of this nation turned to stone?” Biden said. “I don’t think so. I refuse to believe it. I know this country. I know our people. And I know we can unite and heal this nation.”
Biden got another assist on Tuesday from his former boss, ex-President Barack Obama, who delivered another attack on his successor that was dripping with mockery and designed to drive out Democratic base voters in Florida.
Obama ridiculed Trump for turning the White House, perhaps the most secure building in the country, into a Covid “hot zone.” 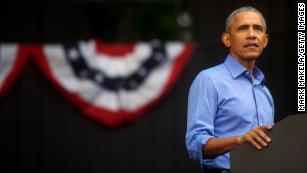 Obama slams Trump over coronavirus: ‘He’s jealous of Covid’s media coverage’
“He said this at one of his rallies, ‘Covid, Covid, Covid,’ he’s complaining. He’s jealous of Covid’s media coverage,” Obama said at a drive-in rally in Orlando. “If he had been focused on Covid from the beginning, cases wouldn’t be reaching new record highs across the country this week.”
As Trump pulls out all the stops, first lady Melania Trump made her first solo campaign appearance, in another swing state, Pennsylvania, in a bid to improve her husband’s reduced standing among female voters.
“The Democrats have chosen to put their own agendas ahead of the American people’s well-being,” she said, while also offering thoughts to citizens, like her, who have suffered from the coronavirus.
In reality, however, Trump has repeatedly denied the seriousness of the pandemic, predicted falsely and repeatedly that it will soon disappear and advocated state openings that sparked a Sun Belt surge this summer in an apparent effort to fire up the economy that is vital for his reelection.
The Trump campaign’s courting of women voters, particularly those in the suburbs, may have been undermined by the President when he used somewhat patronizing language in Wisconsin that betrayed rather an archaic view of suburban marriage between men and women.
“I’m also getting your husbands — they want to get back to work. We’re getting your husbands back to work,” Trump said in Wisconsin.

When will America know who won?

Many Americans want to know whether the result of the election will be clear next Tuesday night — especially since the President has repeatedly warned the election is unfair and pledged to challenge it in the Supreme Court.
If Biden converts his lead in the polls to victories in a swath of swing states, the trend of the election could become clear early on. If he captures states like Florida and North Carolina, for instance, he will effectively close off Trump’s path to 270 electoral votes. But if the President mounts a comeback in battleground states, the race could come down to states like Michigan and Pennsylvania, where mail-in voting counts could last for several days after November 3. That is the moment when the chances of a disputed election rise and bitter legal challenges become a rising risk. Striking an ominous note for Democrats, Justice Brett Kavanaugh set the battle lines for how the Supreme Court might adjudicate election cases brought by Republicans in a ruling on Monday night.
“Under the U.S. Constitution, the state courts do not have a blank check to rewrite state election laws for federal elections,” Kavanaugh wrote in a footnote of his concurring opinion to a decision that rejected a Democratic bid to allow counting of mail-in votes in Wisconsin received six days after Election Day.
His language mirrors that of Trump, who has warned, with no factual basis, that an election night that does not produce a result is in itself evidence of a fraudulent vote.