Washington, D.C. / New York (CNN Business)TikTok and Oracle will become business partners in the United States — a deal meant to satisfy the Trump administration’s national security concerns, according to a person familiar with the matter.

Talk of a sale began as President Donald Trump issued executive orders last month seeking to ban TikTok and requiring that its US operations be spun off from its Beijing-based parent company, ByteDance.

The exact nature of the agreement between TikTok and Oracle (ORCL) remains unclear, but it was not described as an outright sale. The news about Oracle came just after Microsoft announced that it will not buy TikTok’s US operations from ByteDance. 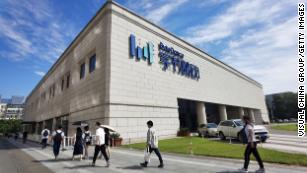 “We are confident our proposal would have been good for TikTok’s users, while protecting national security interests,” Microsoft (MSFT) said in a blog post Sunday. “To do this, we would have made significant changes to ensure the service met the highest standards for security, privacy, online safety, and combatting disinformation, and we made these principles clear in our August statement.”

Oracle did not respond to a request for comment.

Trump and other US politicians have said the app poses a threat to national security. TikTok has denied the allegation.

The agreement with Oracle comes days before a ban on TikTok in the United States was scheduled to go into effect. After September 20, the Commerce Department is expected to clarify which types of business dealings involving TikTok will be prohibited in the country, according to an executive order Trump signed August 6.

It’s not clear whether TikTok’s partnership with Oracle would allow the short-form video app to avert that ban. The scope and language of the order, along with Trump’s own off-the-cuff remarks about TikTok, have led to confusion about how a ban would be implemented. In another executive order, Trump said TikTok had until November 12 to find a buyer.

Separately, a TikTok employee has challenged the looming ban in federal court and is seeking a judicial decision to suspend the August 6 executive order. A hearing to consider the plea is scheduled for Tuesday. TikTok has also sued the Trump administration over one of the orders, calling it “heavily politicized.”

Multiple analysts had described Microsoft’s pursuit of TikTok as a potential “coup” for the Washington state-based firm — an opportunity to scoop up one of the world’s fastest growing social media platforms at a time when TikTok may be desperate to make a deal.

A deal could have also included an American retail giant: Walmart (WMT) was also participating in negotiations with Microsoft over a potential deal. The retailer had said it was interested in how TikTok could have bolstered its access to consumers.

Walmart on Sunday told CNN Business that it “continues to have an interest in a TikTok investment and continues discussions with ByteDance leadership and other interested parties.”

“We know that any approved deal must satisfy all regulatory and national security concerns,” the company said in a statement.