(CNN)People in the Czech Republic can now shop at hardware and bicycle stores, play tennis and go swimming. Austria plans to reopen smaller shops after Easter. Denmark will reopen kindergartens and schools from next week if coronavirus cases remain stable, and children in Norway will return to kindergarten a week later.

These nations are the first in the West to start feeling their way gradually out of the limits on daily life imposed by governments to curb the spread of the coronavirus.
Others will want to see what lessons can be learned as they too eye an exit route from lockdown amid growing social and economic pressures at home.
For professional athlete Irena Gillarova, from the Czech Republic, the easing of restrictions Thursday meant she could return to training at the Juliska stadium in Prague for the first time since her country locked down.
“It was great, honestly. I was full of excitement and I feel great,” the javelin thrower told CNN on Friday. “These two weeks at home helped me to appreciate my job even more than before and not take it for granted.”
The athletes have a schedule to ensure only a certain number of people are at the stadium at once. “I felt 100% safe,” the 28-year-old said. “I feel the system is pretty good and we are trying to be smart about it. We are all taking it responsibly.”
Dr. Peter Drobac, a global health expert at the Oxford Saïd Business School, told CNN that those countries now easing their restrictions were “important and hopeful examples” for the West.
“We still have a lot of learning to do about how we are going to come out of lockdowns safely and effectively,” he said.
Any loosening of limits will carry risk. The World Health Organization’s Regional Director for Europe, Dr. Hans Kluge, warned this week that the situation in Europe is still “very concerning” and insisted “now is not the time to relax measures.”
Europe “remains very much at the center of the pandemic,” he said Wednesday, with seven of the top 10 most affected countries globally located on the continent.
And a study based on China’s outbreak, published in medical journal The Lancet, has suggested that coronavirus lockdowns across the globe should not be completely lifted until a vaccine for the disease is found.

‘In a much better place’

None of those planning to ease their restrictions in the coming days are among Europe’s worst affected — and they will be keen to avoid a second wave of infections. So how have they got here?
According to Drobac, the countries preparing to ease restrictions had something in common: they were among the first in Europe to implement lockdowns or severe social distancing measures and had rapidly scaled up coronavirus testing.
Related stories
“They had these things in place and as a result they are already past the peak of infections there,” he said. The numbers of coronavirus-related deaths in these nations are in the tens or hundreds, rather than the thousands, he said, and “they are in a much better place because of proactive action.”
What they’ve announced about how they plan gradually to relax restrictions “looks reasonable and it looks smart,” Drobac said.
“It’s a very gradual process and they will be able to learn and track things in terms of new infections. But if they ease up too much and infections start to spike, they can pull back a bit. That’s how every country is going to have to do it.”
Other countries looking to follow in their path need to meet three general criteria, he added, especially if they are to avoid a second wave.
Firstly, they need to have “bent the curve” and seen a consistent reduction in the number of new cases, he said. Secondly, their health care systems need to be able to cope without resorting to crisis measures such as emergency hospitals.
Thirdly, they need a system in place for mass testing, contact tracing and isolation, so that sick people can be isolated early before they infect others, he said, “which is public health 101 and what I wish we were all doing from the beginning.”

Denmark has said it plans to send children back to school and kindergarten from April 15 if coronaviruses cases remain stable.
But life there will still look far from normal.
Many restrictions will remain in place and their roll-back may be phased, the government said. A ban on gatherings of more than 10 people has been extended until May 10 and all church services, cinemas and shopping centers will also remain closed.
All festivals and large gatherings will still be banned until August, Prime Minister Mette Frederiksen said. Denmark’s borders will remain shut. 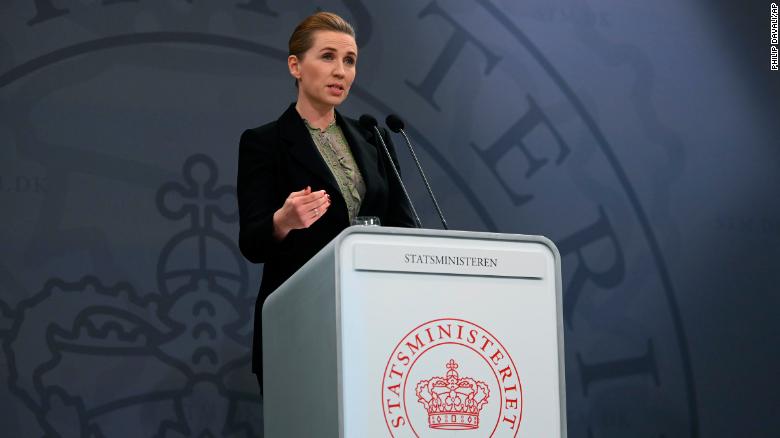 Denmark’s Prime Minister Mette Frederiksen speaks during a coronavirus press conference, in Copenhagen, Denmark, on Monday.
“This will probably be a bit like walking the tightrope,” Frederiksen told a media briefing Monday, according to Reuters news agency. “If we stand still along the way we could fall and if we go too fast it can go wrong. Therefore, we must take one cautious step at a time.”
The nation of 5.8 million was among the first European to close its borders on March 13. In that same week, it closed schools, cafes and shops, as well as banning gatherings of more than 10 people and visits to hospitals.
“The only way we have avoided the tragic scenarios in places like Italy and the US is because we [Denmark] acted quickly,” Frederiksen said on Danish national TV.

The Czech Republic also moved swiftly to impose restrictions on travel, ban large events and close non-essential businesses, after declaring a state of emergency on March 12. Unusually in Europe, it also required its 10.7 million people to cover their faces with masks or scarves when outside the home from 19 March.
Those strict containment efforts now appear to be paying off, as the government announced Monday that it would begin relaxing some coronavirus restrictions this week.
Since Tuesday, people have been allowed to exercise alone without face masks. Shops such as construction and hardware stores, bicycle stores and bicycle repair centers are among those allowed to reopen from Thursday. Outdoor facilities for individual sports are also reopening, but only to some extent — no more than two people can be in the same space and they can’t use showers or lockers.
Essential travel outside the Czech Republic will be allowed from April 14, a government press release says.
Gillarova, the athlete, remains hopeful that international competition will restart at some point this year — perhaps with the European Athletics Championships in Paris this August — after the disappointment of the Olympics being pushed back to 2021. 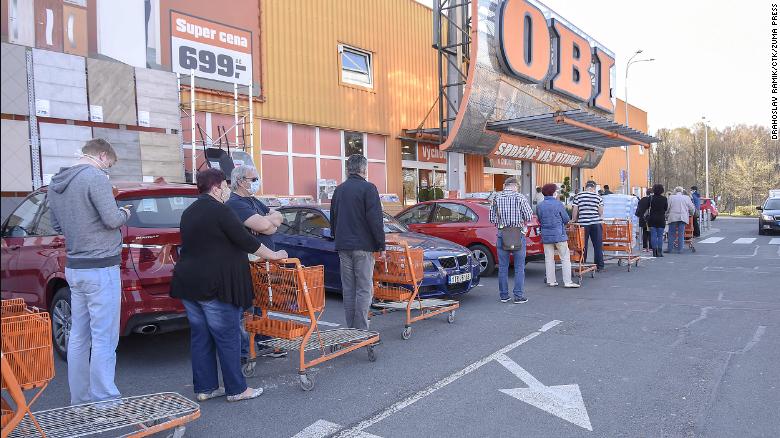 People wait in line to enter a reopened shop in the city of Havirov, in the Czech Republic, on Thursday.

Neighboring Austria, where the popular winter sports resort of Ischgl, in Tyrol province, was linked last month to the spread of coronavirus to other parts of Europe, is taking a different approach as it eases restrictions.
Austrian Chancellor Sebastian Kurz announced this week that the country was preparing for a “resurrection” after Easter, by reopening some smaller shops, hardware and garden stores from April 14. But it will also now require people to wear face masks to supermarkets and on public transport. 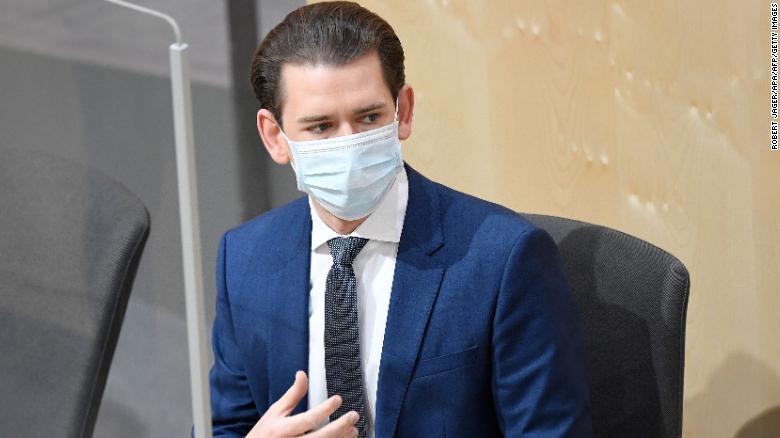 Austria’s Chancellor Sebastian Kurz wears a protective mask as he arrives for a special session of the National Council on April 3 in Vienna.
From May 1, all shops, shopping centres and hairdressers will open; meanwhile restaurants and hotels will open from mid-May at the earliest in a gradual process. This will happen “under strict security conditions, of course,” said Kurz.
He also cautioned that the danger from the coronavirus is not yet over, citing Singapore, which has seen a resurgence in cases in recent days. “Those who believe that the situation is under control are wrong,” he said.

The government will decide at the end of April whether to extend home-schooling beyond the middle of May and no major events will be held until the end of June.
“Our aim has to be to step-by-step eliminate the disease,” Kurz said. “Let’s all pull together for one more week.”
Last week, Austria carried out testing of 1,500 people across the country in an attempt to gauge how widely the coronavirus had spread. The study found less than 1% of the non-hospitalized population were infected. Previously, Austria had focused testing on those who were seriously ill with symptoms associated with the virus.
The number of confirmed coronavirus cases in Austria had reached 12,969 as of Thursday, the country’s health ministry said. The death toll stood at 295.

Norway is taking a different approach again, prioritizing the reopening of schools as it eases containment measures introduced in mid-March. 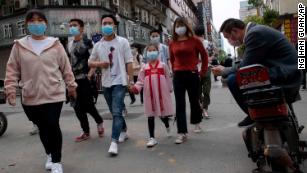 Lockdowns shouldn’t be fully lifted until coronavirus vaccine found, new study warns
It will begin to scale back its lockdown measures from April 20, Prime Minister Erna Solberg said, when kindergartens will start to reopen. A week later, schools will reopen for pupils in grades one to four.
“Our ambition is for all students to somehow get back to school before the summer,” Solberg said.
The government believes that the latest statistics provide a basis for “cautious optimism,” indicating that the infection rate has leveled off, the prime minister said.
“By working together, we have got the virus under control, and can start to lift restrictions little by little. We will do this together, cautiously, and taking our time.”
According to the Norwegian Institute of Public Health, Norway had 6,244 confirmed Covid-19 cases as of Thursday, and 92 deaths as of Friday morning.

Others are taking tentative steps towards easing their lockdowns, while setting no firm date as yet. 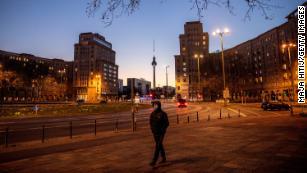 How do you reopen the economy after coronavirus? German experts have a plan
Germany’s Chancellor Angela Merkel said Thursday the latest coronavirus numbers in her country gave reason for “cautious hope” but warned that Germans must adhere to the current restrictions over the Easter holiday weekend.
She said a decision on whether and how to ease the measures would be based on a broad scientific study to be published next week.
Health Minister Jens Spahn earlier said the country had seen a “flattening out” in newly reported infections, as restrictive measures on public life take effect. Germany is currently conducting 100,000 coronavirus tests per day, he said, and 40% of its intensive care beds remain vacant despite the crisis.
”We want to gradually return to normality — but we are still far from an everyday life as we knew it before corona,” Spahn said. “Not everything will go back to the way it was. We will continue to live in and with the pandemic in Germany.” 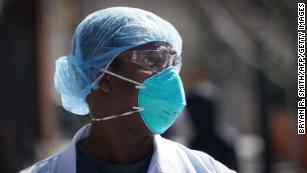 How to win the fight against a virus that knows no boundaries
Switzerland is also considering a way out of confinement. Despite the extension of social distancing restrictions to April 26, its government has indicated that other measures could be relaxed later this month — including border controls, school closures and bans on gatherings — if the virus’ spread is kept in check.
As these countries and others walk the tightrope between protecting public health and keeping their economies alive, it’s clear many pitfalls lie ahead.
The WHO’s Kluge stressed that it was “the time to once again double and triple our collective efforts” to suppress the virus.
“To think we are coming close to an end point would be a dangerous thing to do,” he said. “Any shift in our response strategy, relaxing of lockdown status or physical distancing measures, requires very careful consideration.”