Speaking to CBS on Sunday, Navalny said “I think it’s extremely important — that everyone, of course, including and maybe in the first of all, President of United States, to be very against using chemical weapons in the 21st Century.”
Navalny, a fierce critic of the Kremlin, became gravely ill on a flight from the Siberian city of Tomsk to Moscow on August 20. He was treated at the Charite Hospital in Berlin and was discharged in late September.
“I said to the flight attendant, and I kind of shocked him with my statement: ‘Well, I was poisoned and I’m gonna die.’ And I immediately lay down on — onto his feet,” Navalny said of the moment he realized he’d been poisoned.
The Organization for the Prohibition of Chemical Weapons has confirmed that blood and urine samples taken from Navalny showed the presence of Novichok, a Soviet-era group of nerve agents. Novichok was also used in a March 2018 attack on former Russian spy Sergei Skripal in the English cathedral city of Salisbury. 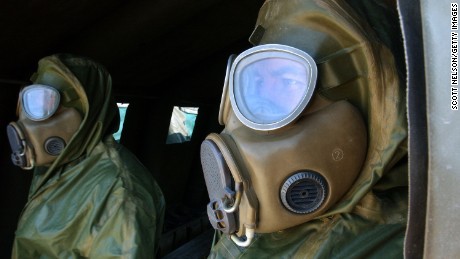 What are nerve agents like Novichok and how do they kill? 01:34
Siberian investigators found Novichok on a bottle from the hotel where he was staying in Siberia, Navalny said.
“I think that when I was — maybe put some clothes with these — with this poison on me, I touch it with the hand, and then I sip from the bottle. So this nerve agent was not inside of a bottle but on the bottle.”
Navalny went on to say that Moscow denies carrying out the attack because to acknowledge it would also mean admitting Russia still has banned weapons and is improving them.
He said Russian President Vladimir Putin is using these weapons to “kill me and, you know terrify others,” claiming that Putin is “enjoying” the fact people can drop dead and there is no gun, or no trace of what happened.
The Russian opposition leader said the Novichok allegedly used on him is “maybe the most toxic agent invented by the humans. It’s a new type of Novichok, which proves that, unfortunately that Putin is developing new program of this chemical weapon, which is forbidden.”
When asked why one of the oligarchs whom Navalny embarrassed by exposing their corruption might not have ordered the poisoning, Navalny said Novichok was too hard to come by.
“It’s not something you can buy in the store even if you have billions of dollars,” he said, adding that specialist knowledge is also required to use the poison.
He added that if Putin was not responsible for the attack, “why there is no investigation?”