(CNN)The path in the Senate to convict Donald Trump is extremely slim, with a growing number of Republicans expressing confidence that the party will acquit the former President on a charge that he incited the deadly insurrection aimed at stopping President Joe Biden’s electoral win.

After Democratic leaders announced they would kick off the process to begin the impeachment trial on Monday, Republicans grew sharply critical about the proceedings — and made clear that they saw virtually no chance that at least 17 Republicans would join with 50 Democrats to convict Trump and also bar him from ever running from office again.

In interviews with more than a dozen GOP senators, the consensus was clear: Most Republicans are likely to acquit Trump, and only a handful are truly at risk of flipping to convict the former President — unless more evidence emerges or the political dynamics within their party dramatically change. Yet Republicans are also signaling that as more time has passed since the riot, some of the emotions of the day have cooled and they’re ready to move on.

“The chances of getting a conviction are virtually nil,” said Sen. Roger Wicker, a Mississippi Republican.

“I don’t know what the vote will be but I think the chance of two-thirds is nil,” said Sen. John Cornyn, a Texas Republican and member of his party’s leadership who called the Democratic push to begin the trial “vindictive.”

“From listening to the dynamic — and everything to this point — it’s going to be tough to get even a handful,” said Sen. Mike Braun, an Indiana Republican, referring to possible GOP defectors. “I think so many are getting confused by the fact that we’re doing this – and everybody has views that it’s kind of a constitutional concern.”

The GOP arguments are now coming into sharper focus, claiming the proceedings are unconstitutional to try a former President and contending that the trial is moving on too short of a timeframe to give due process to Trump, claims that Democrats resoundingly reject. But those arguments, Republicans believe, will allow them a way out of convicting Trump without endorsing his conduct in the run up to the deadly mob that ransacked the Capitol on January 6. And Senate Minority Leader Mitch McConnell is likely to land in the same spot as much of his conference, GOP senators believe, although the Republican leader has said he would listen to the arguments first before deciding how to vote.

Politically, most Republicans are not eager to break ranks and draw the kind of attacks that came the way of the 10 House Republicans who voted to impeach Trump last week for the second time in his presidency, this time on a charge of inciting an insurrection.

“Many view it as a game of shirts and skins,” said one GOP senator, referring to how many of his colleagues view the proceedings as a strictly partisan affair.

For the Democrats, the calculation is also tricky. If they seek a longer trial — even as long as the 21 days of Trump’s first impeachment trial in 2020 — with witnesses, they could satisfy some Republicans who are arguing that the trial must give adequate opportunity for Trump to make his case. Yet, doing so could eat away at the first full month of the Biden presidency, while a shorter trial would alienate some Republicans.

“I’m not for any witch hunts,” said Cornyn, who noted he’d be less likely to convict if it were a short trial with no witnesses. “This needs to be a fair and respectable process because whatever we do, it’s not just about President Trump. This is about setting a new precedent and as you know, once we do things around here and there is a precedent for it, then that’s the rule for the next time this happens.”

Among the most likely GOP defectors are Sens. Mitt Romney of Utah, Susan Collins of Maine, Ben Sasse of Nebraska, Lisa Murkowski of Alaska and Pat Toomey of Pennsylvania. But Republican leaders who monitor their conference closely don’t see much of a chance that the list will swell to 17 senators unless something dramatically changes or more is learned about Trump’s role in stoking the violent mob. 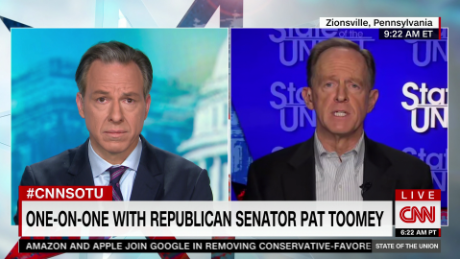 “There’s less than a handful of Republicans in play,” said Sen. Lindsey Graham, the South Carolina Republican who is lobbying his colleagues to stick with Trump or risk “destroying” their party.

And even some who had been viewed as possible swing votes are critical of Democrats for trying to start the trial immediately, rather than abiding by the timeline proposed by McConnell to push off the floor proceedings until later in February.

“It’s very problematic, I would say, for the folks who are bringing this right now from a timing standpoint,” said Senate Minority Whip John Thune, the No. 2 Republican, who has been critical of Trump’s conduct and also is up for reelection in 2022. “I think it’s going to be very important whether or not there’s due process.”

Added Murkowski: “I think what McConnell laid down was eminently reasonable, in terms of making sure that we got process. Got to have process and the process has to be fair.”

Collins, the Maine Republican who has been sharply critical of Trump’s conduct, said that she is consulting with “constitutional scholars” about the proceedings. Asked about the GOP senators’ assessment that Trump almost certainly won’t get convicted, she said: “That’s not an unreasonable conclusion, but I just don’t know.”

McConnell himself has privately viewed Trump’s handling of the riots with disdain and has told people they amounted to at least an impeachable offense, while even saying the mob was “provoked” by the former President. But McConnell has made clear to his colleagues that he is undecided — and several Republicans told CNN this week that he could be at risk of losing his perch atop the Senate GOP conference if he votes to convict Trump.

And in the last two days, McConnell has publicly made the case to give Trump’s team more time to prepare. With much of the GOP conference now lining up against conviction, Republicans speculate that the GOP leader will likely vote to acquit as well.

One of the key hurdles the House Democratic managers will have with Republicans is convincing them that a trial is constitutional, as a group of Senate Republicans have argued in recent days that a trial for an ex-president who is now a private citizen is unconstitutional. Such an argument could give Republicans a reason for voting to acquit Trump without addressing his conduct surrounding the insurrection at the Capitol earlier this month.

“I think it’s obvious that the post-presidential impeachment has never occurred in the history of the country for a reason, that it’s unconstitutional, that it sets a bad precedent for the presidency and it continues to divide the nation,” Graham said Friday.

It’s a debate that enters into unprecedented territory, as the Senate has never held an impeachment trial for a President who has left office because such a scenario never arose. But Democrats have pointed to legal scholars on both ends of the political spectrum who say a trial is constitutional. Legal analysts say there’s precedent for a Senate impeachment trial of a former official, as the Senate tried Secretary of War William Belknap in 1876 after he resigned just before the House voted to impeach him.

“It makes no sense whatsoever that a president — or any official — could commit a heinous crime against our country and then be permitted to resign so as to avoid accountability and a vote to disbar them from future office,” Schumer said Friday.

Republican defenders of Trump push back.

Sen. Josh Hawley, a Missouri Republican who has generated blowback for joining with House Republicans to try to overturn Pennsylvania’s election results, distanced himself from Trump’s remarks at the January 6 rally where he urged his supporters to go to the Capitol that day, calling them “inflammatory” and “irresponsible.”

But when asked how they should hold Trump accountable, Hawley said: “Breaking the Constitution and using an unconstitutional process is not the way to do it.”