Jerusalem (CNN)Tensions in Jerusalem reached their highest point in years as rocket sirens blared across the city and other areas closer to Gaza’s border on Monday evening, capping another day of violence in the holy city during which hundreds of Palestinians were injured in clashes with Israeli police.

The Israel Defense Forces (IDF) said militant groups in Gaza Strip launched six rockets at Jerusalem shortly after 6:00pm local time (11 a.m. ET). One of the rockets caused some damage at a home on the western outskirts of Jerusalem, a second was intercepted by the Iron Dome aerial defense system and four landed in open terrain, IDF spokesman Jonathan Conricus said.
As night fell, the IDF responded with a series of airstrikes in Gaza. 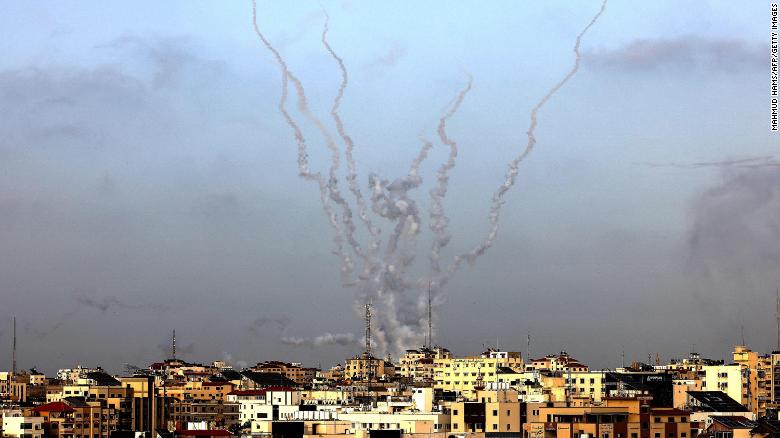 The IDF said dozens of rockets were fired at locations across southern and central Israel on Monday.
“After terrorists in Gaza fired a barrage of rockets at central and southern Israel over the past few hours, we just struck three Hamas terrorists in Gaza,” the IDF said in a statement. Later the army said it had also attacked a tunnel, and rocket launchers, and said more sites would be hit overnight.
The Palestinian Ministry of Health said twenty people had been killed, including nine children, though it was not immediately clear how many had died as a result of Israeli airstrikes.
A statement by Hamas said, “We salute the Palestinian martyrs who were killed on Monday evening in the Israeli airstrikes in the Gaza strip.”
By 11pm local time (4pET) the IDF said about 150 rockets had been fired from Gaza into Israeli territory, of which dozens had been intercepted by the Iron Dome.
Hamas, the Palestinian militant group that controls Gaza, claimed responsibility for the initial rocket fire on Jerusalem, which occurred just hours after it demanded that Israeli police withdraw from Jerusalem’s Al Aqsa mosque complex, where hundreds of Palestinians have been injured in clashes with police at the mosque, considered one of the holiest sites in the city.
Jersualem has seen repeated confrontations between Israeli police and Palestinians across the city for several weeks now, with Palestinians accusing Jewish nationalists of provocation and police of heavy-handed tactics.

A new escalation in violence

Monday’s violence marked a grim new turn, with Israeli Prime Minister Benjamin Netanyahu describing the barrage of missiles as having “crossed a line” and vowing to “respond with great force.”
“We are in a fight on several fronts: Jerusalem, Gaza and elsewhere in the country. This evening, on Jerusalem Day, the terrorist organizations in Gaza have crossed a red line and attacked us with missiles in the outskirts of Jerusalem,” Netanyahu said at a ceremony at Ammunition Hill to mark Jerusalem Day.
Netanyahu also said that while Israel does not seek an intensification of hostilities, “the current conflict could continue for some time.” 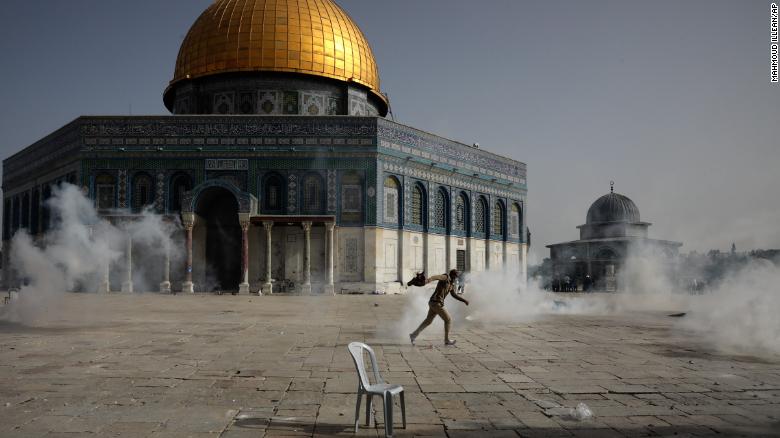 A Palestinian man runs from tear gas during clashes with Israeli security forces in front of the Dome of the Rock on Monday. 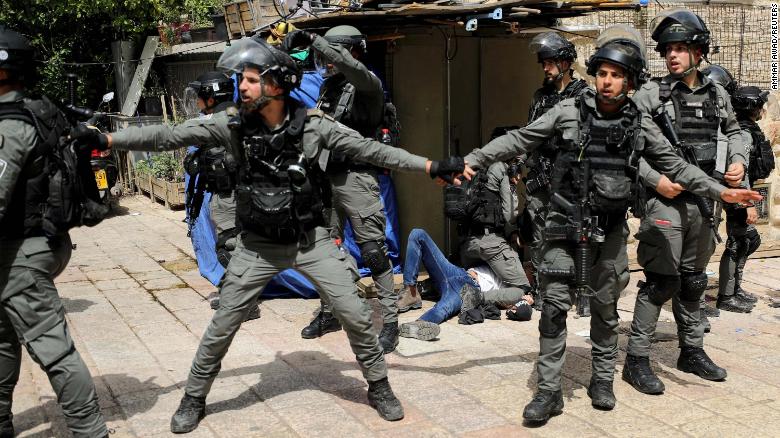 Monday’s violence in and around the Al Aqsa mosque was the most serious seen in the city in the last few weeks. Videos from early morning showed Israeli police inside the mosque firing stun grenades. Palestinians were filmed throwing rocks. After a relative lull that lasted much of the day, there were further clashes in the late evening when Israeli police again entered the mosque after night prayers.
A paramedic, Ramzi Halaq, who was inside the mosque when the police entered a second time told CNN, “the police were targeting us directly as paramedic … and were preventing us from conducting our duties and taking out the injured.”
By midnight, the Palestinian Red Crescent said that 520 people had been injured through the course of the day with 333 people requiring treatment in hospital.
Adding to tensions on Monday, a car drove into two pedestrians near the Lion’s Gate entrance to the Old City after it was pelted with stones, according to video of the incident.
The car, carrying religious Israelis, came under attack by young Palestinians as it tried to change direction, before it accelerated forward and mounted the curb, sending two people hurling backward.
Police said the driver had lost control of the vehicle and that its occupants were slightly injured. The condition of the two people it struck is not yet known.

Sheikh Jarrah: A neighborhood at the center of unrest 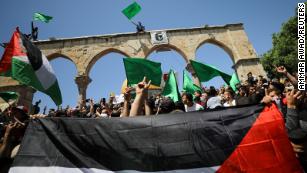 Israeli Supreme Court delays hearing on Palestinian evictions from East Jerusalem neighborhood
One of the main sources of growing unrest in recent days has been the possible eviction of several Palestinian families from their homes in the Jerusalem neighborhood of Sheikh Jarrah. On Sunday, Israel’s Supreme Court postponed an appeal hearing on the decades-long legal case.
A pro-settler organization called Nahalat Shimon is using a 1970 law to argue that the owners of the land before 1948 were Jewish families, and so the current Palestinian landowners should be evicted and their properties given to Israeli Jews.
Palestinians say restitution laws in Israel are unfair because they have no legal means to reclaim property they lost to Jewish families in the late 1940s in what became the state of Israel. 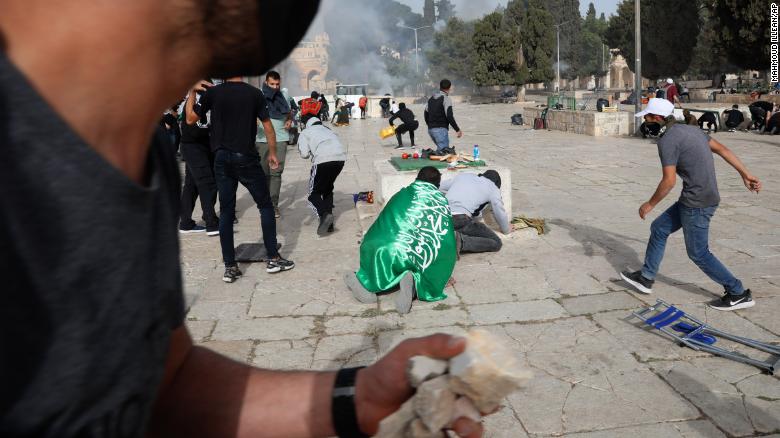 Hundreds of Palestinians were injured in the clashes with Israeli police Monday.
The situation in Sheikh Jarrah has drawn worldwide attention, with the United States again expressing concern on Monday.
White House press secretary Jen Psaki said the US had “serious concerns” about the violence in Israel before adding that President Biden is continuing to monitor the situation.
“This is something that our national security team is closely monitoring, obviously, across government, certainly the President is kept abreast and is watching closely as well, Psaki told reporters at a White House briefing.
US National security adviser Jake Sullivan had a call with his counterpart in Israel, Meir Ben-Shabbat, on Sunday regarding the situation in Jerusalem.

Israeli Supreme Court delays hearing on Palestinian evictions from East Jerusalem neighborhood
On the phone call, Sullivan highlighted recent engagements by senior US officials with senior Israeli and Palestinian officials and key regional stakeholders to press for steps to deescalate tensions, according to a readout provided by the White House.
Sullivan reiterated the United States has serious concerns about the potential evictions of Palestinian families from their homes in the Sheikh Jarrah neighborhood, the readout says.
“They agreed that the launching of rocket attacks and incendiary balloons from Gaza towards Israel is unacceptable and must be condemned,” according to the readout.
“Sullivan expressed the administration’s commitment to Israel’s security and to supporting peace and stability throughout the Middle East, and assured Mr. Ben-Shabbat that the U.S. will remain fully engaged in the days ahead to promote calm in Jerusalem,” the readout said.

International calls to curb the violence emerged quickly following the aerial attacks.
US Secretary of State Antony Blinken said the rocket attacks against Israel “need to stop immediately” and called for de-escalation by “all sides.”
The US is “very deeply concerned about the rocket attacks that we’re seeing now, that need to stop and need to stop immediately,” Blinken said, speaking alongside Jordanian Foreign Minister Ayman Safadi at the State Department. “Even as all sides take steps to de-escalate, Israel of course has a right to defend its people and its territory from these attacks.”
Blinken also spoke of concerns over the “provocative actions” in and around Haram al-Sharif, the third-holiest site in Islam, which is also known to Jews as Temple Mount.
Jordanian Foreign Minister Ayman Safadi echoed Blinken’s remarks, describing the situation as “extremely dangerous” and saying the priority is to “stop the escalation, make sure that international law is respected, rights of Palestinians, rights of worshippers are upheld, status quo is preserved and move forward to creating that political horizon” that would allow for a comprehensive peace.”