Jerusalem (CNN)Israelis are voting in a closely watched general election on Tuesday, seen here as a referendum on Benjamin Netanyahu.

On March 31, Netanyahu marked ten uninterrupted years as Israel’s Prime Minister, in addition to the three years he led the country in the 1990s, and there is little doubt that he’s won a place in the A-list of world leaders; for a man leading a country of fewer than nine million people, his clout and recognition are a remarkable achievement. But at home he has become a highly polarizing figure, inspiring devotion and revulsion in equal measure.
Netanyahu has fought this election in the face of looming indictments for bribery and breach of trust offences. The Attorney General has called him for one final hearing before he decides whether or not to bring charges. Unbowed, Netanyahu has denied the charges and sought to turn these criminal investigations to his advantage, portraying them as a witch-hunt, led by a left-wing media elite.
As CNN discovered when it visited a stronghold of his party Likud, in the desert town of Beersheva several weeks ago, that message resonates strongly with many blue-collar Israelis. The local Likud organizer in the town compared Netanyahu to Moses, saying, “The more they go after him, the stronger he becomes.”
Another key component of Netanyahu’s campaign has been exploiting his status as a world statesman, with close ties to both the President of the United States and the President of Russia, both of whom have been quite ready to do him favors in recent weeks. On a visit to Washington, Donald Trump signed a proclamation recognizing Israeli sovereignty over the Golan Heights, in defiance of overwhelming international consensus. This on top of earlier Trump decisions to switch the US embassy from Tel Aviv to Jerusalem and withdraw the United States from the Iran nuclear deal.
Just days before the election, on a visit to Moscow, Netanyahu was able to personally thank Vladimir Putin for Russia’s key role in locating the body of an Israeli soldier who had been missing in Lebanon for nearly 37 years. Even Netanyahu’s critics have been forced to acknowledge that the Israeli leader’s relationship with Putin has been remarkably fruitful, allowing the Israeli military considerable freedom to operate against Iranian targets in Syria, which Netanyahu always cites as Israel’s number one security consideration.
The election was called in December, ostensibly after the government gave up on efforts to get a new military draft law through Parliament. It seems clear that Netanyahu believed the timing was right—sending voters to polls before any indictments were brought against him, and with a message he could sell to the electorate. Speaking to his Likud lawmakers on the day the election was called he said the outgoing government had “outstanding achievements” on which to campaign. 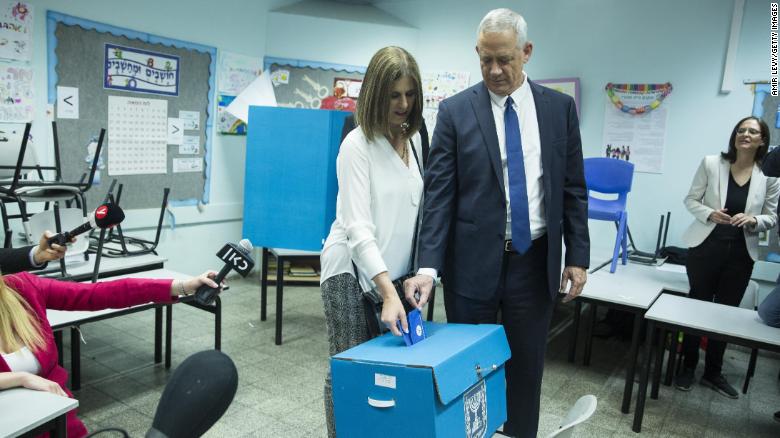 Benny Gantz and his wife, Revital, cast thier ballot at a polling station in Rosh Ha’ayin.
At first facing a diverse array of opponents, Netanyahu saw his challenge crystalize after a dramatic announcement in February, which saw three former army chiefs come together with a former TV news anchor-turned-politician to create the Blue and White party.
The name was simple but significant. Blue and White are the colors of the Israeli flag. The message was equally simple: Blue and White had been created to reclaim the state of Israel from Prime Minister Netanyahu. The man who would lead that campaign and present himself as the anti-Netanyahu candidate was Benny Gantz, a former head of the army, who had held that position under Netanyahu, fighting two wars in Gaza during his tenure.
Gantz’s entry into the political arena had been widely anticipated, and, indeed, hoped for in many quarters. Blue and White’s polling numbers quickly surged, turning it into a two-horse race. The campaign was hard and personal. After it emerged that Iran had allegedly hacked Gantz’s phone, Netanyahu questioned whether he could be trusted to keep the country safe if he couldn’t look after his phone.
Netanyahu loyalists also suggested Gantz had abandoned a dying soldier after an attack many years ago in the West Bank town of Nablus. Blue and White rejected the slur, Gantz was also cleared by an IDF inquiry. For his part, the Prime Minister announced he intended to sue Gantz and his key ally, Moshe Ya’alon, after the latter suggested Netanyahu could be guilty of treason in connection with an investigation into military procurement.
As the election entered its final days, most polls showed Gantz with a slim lead over his rival. But the same polls suggested that Netanyahu’s route to building a successful coalition would be more straightforward, due to the large number of other right-wing parties projected to win seats. Indeed, the projected success of several hard-right parties could be a key outcome of this election.
Netanyahu’s final campaign move involved a series of major TV interviews in which he chose to push the issue of annexation of the West Bank.
If re-elected, Netanyahu told one interviewer, “I am going to apply Israeli sovereignty to the settlements. And I don’t differentiate between the settlement blocs and the isolated settlements,” a reference to three areas of the West Bank where most Israeli settlements are located, known as the blocs, and other, smaller settlements scattered across the territory.
Any such move would be highly controversial. The international community regards the West Bank as occupied Palestinian land and remains committed to the eventual establishment there of a Palestinian state. Gantz called Netanyahu’s remarks ‘irresponsible’ electioneering and said that as Prime Minister he would not make any unilateral moves in the Israeli-Palestinian conflict.