Brasilia, Brazil (CNN)The police cavalry horses pranced through red dust towards an open grave nobody expected would be dug for Sgt. Jonas Mendonça. The 58-year-old military policeman was slightly overweight but otherwise healthy, his family says, when he got mild Covid-19 symptoms. Four days later, a fierce fever hit and he was hospitalized.

Following the advice of Brazil’s health ministry, Mendonça’s doctors gave him hydroxychloroquine, along with antibiotics, fever-reducing antipyretics and adrenaline, according to relatives.

“In the last two days [the doctors] were very hopeful,” said his daughter Thais Saturnino Mendonça. “The fever was over. The pulmonary and respiratory condition was evolving. It was good.”

Yet he died suddenly. “God’s will,” Thais said. 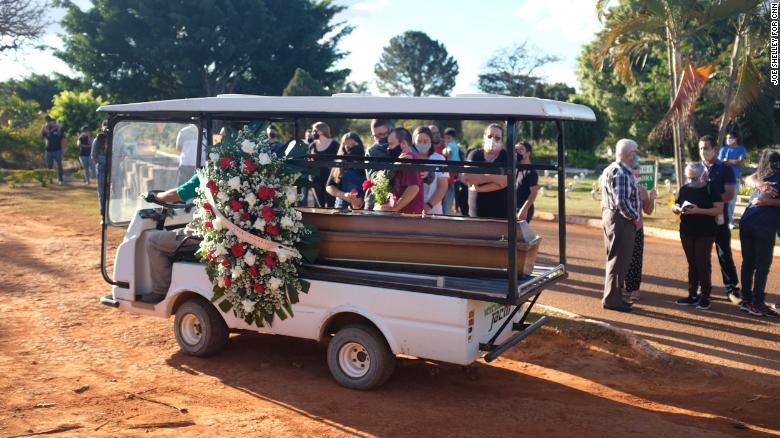 Mourners at the burial of Sgt Jonas Mendonça, a military policeman who died with Covid-19.

In Brazil — home to South America’s worst coronavirus outbreak, where as many as 50,000 new cases have been recorded per day — the drug is at the heart of a febrile scrap over politics and faith. Science has shown it doesn’t work, but Brazil’s Health Ministry and President insist it does — luring many in Brazil with false hope.

Mendonça’s brother Juraci is now taking hydroxychloroquine, too, as a prophylactic, part of another unproven government-backed drug cocktail with ivermectin and azithromycin.

“I am here,” he said, as evidence of the drug’s effectiveness. “Other people in my circle of friends who also used hydroxychloroquine did very well. But it is that question: Sometimes a different issue makes the person end up with a more serious situation. Understood?”

The jury is not out on hydroxychloroquine — it has long gone back to its day job. Study after study has shown it is not effective against Covid-19, and it may even be harmful. Professor Flavia Machado, from the research group Coalizao Covid-19 Brasil and an ICU director of Hospital Sao Paulo, conducted the largest study of the drug across 55 hospitals in Brazil. She said that while they continue to assess its use in the early stages of the disease, it should for now only be used in clinical trials. 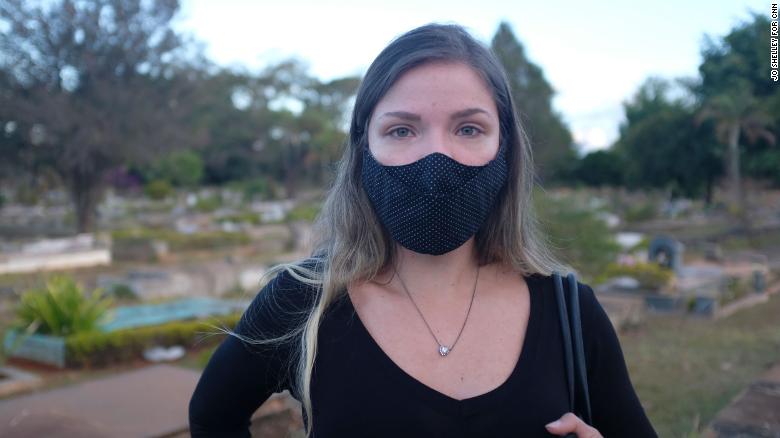 Thais Saturnino Mendonça at the burial of her father, Sgt Jonas Mendonça, in Brasilia. He died of Covid-19. “God’s will,” she said.

“We are studying the harmful effects, and everything that we see now, with a good level of evidence, is against the use,” she told CNN.

Globally the debate about hydroxychloroquine — settled by science yet still raging in the mouths of politicians looking for hope to sell — is wasting time, said former US Surgeon General Dr. Vivek Murthy. “All the time that we often end up spending dispelling these myths around hydroxychloroquine is time that we are not spending working on solving the actual problem in front of us,” he told CNN.

In Brazil, the drug’s advocates dismiss the studies and point towards outlier research that suggests it may have a positive impact in the very early stages of onset — though even this study is under criticism and has been countered by other work reporting no impact. President Jair Bolsonaro regularly brandishes hydroxychloroquine when meeting his supporters, and has credited it for his recovery from a fortnight infection with the disease.

Brazil has imported millions of doses of the drug, and a survey released Sunday by the Medical Association of Sao Paulo State showed that fifty percent doctors in the state felt pressure to prescribe the unproven drug. 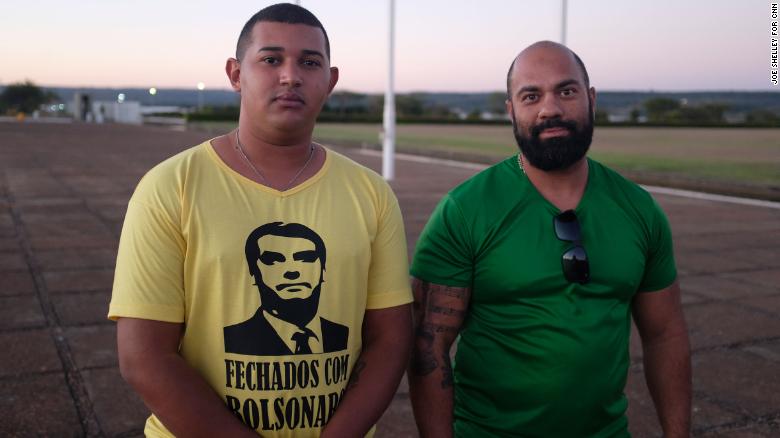 Supporters of President Bolsonaro gather outside his residence. One wears a t-shirt that reads “Sticking with Bolsonaro” on the front and “All power to the people” on the back.

Recently, Bolsonaro has recently moderated his rhetoric about hydroxychloroquine, saying that he isn’t advocating it — but that medication is for patients to choose with their doctor. Yet the repeated photo opportunities, and the Health Ministry’s encouragement that patients of all kinds take it — from pregnant women to moderate cases — have had an huge impact.

Supporters gathered outside the President’s official residence, Alvorada Palace in Brasilia, on Tuesday, where it was clear that support for the President is often intertwined unquestioningly with support for the drug. One man wore a yellow t-shirt that read “Sticking with Bolsonaro” on its front, and “All power to the people” on the back. A woman in a red jacket, who declined to give her name, railed at Chinese influence in Brazil.

Another supporter, Felipe, said he was hoping the President would appear. “Last Sunday he came for the flag being lowered,” he said. “We are expecting him because he tested negative for Covid-19 yesterday, so today is a day to celebrate.” He then launched into a very precise and detailed description of how hydroxychloroquine blocks virus transmission in the cells — a theory that has been contradicted by study after study.

Yet advocates of the drug do not always dismiss other proven measures. At the Nucléo da Fé evangelical church down the road in Brasilia, science-based protocols blend with faith. Worshippers wear masks and use hand sanitizer gel on their hands, each family group sitting roughly six feet apart, as recommended by health experts around the world. Yet emotion takes over in their support for the President and apparently the drug that he claims worked for him. 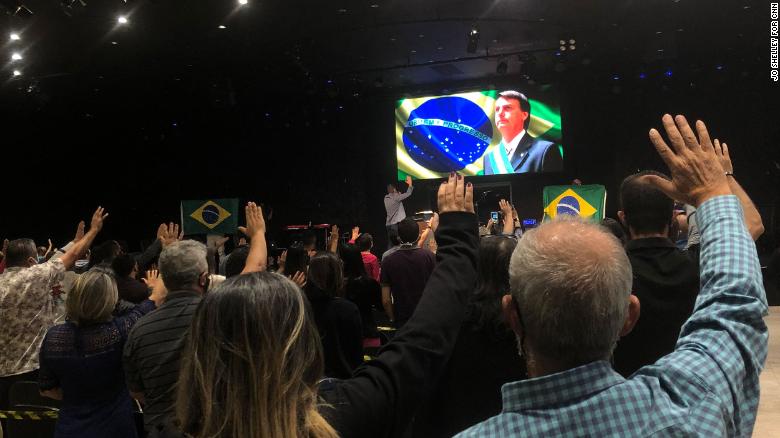 Pastor Wilbert Batista took the stage, and began with kind words for Bolsonaro, with whom he has often been pictured drinking coffee and having lunch, even riding together on a helicopter. In Jesus’ time they had kings, he told congregants, “but in our country, we have a President, and it is our biblical duty to pray for our President. And we have done this, in several vigils. God led me once to the President, and in the coming days I expect he will again. Why? Because God knows I have been praying for him. Because of this, Brazil is already having results that cannot be explained. Our country is working well, in the name of Jesus.” Bolsonaro’s image was emblazoned on the stage screen.

Aside, Batista told CNN that hydroxychloroquine is popular and seemed to link it to his congregation’s lack of deaths. “Medicine is not our focus, yet in church we have doctors and other doctors also agree with the treatment the President speaks about,” he said, adding they don’t discuss medicine in church. “Not a single death in our church, not a single one. One person was hospitalized, others lived without symptoms, in a congregation of 3,000. Some of the people infected have taken the hydroxychloroquine protocol with azithromycin. Others follow medical advice at the doctors.”

Behind him the worship continued, huge doors on either side of the congregation blowing a clean wind across their outstretched palms.