Jakarta, Indonesia (CNN)Human remains and plane wreckage have been pulled from the crash site of an Indonesian passenger jet that plunged into the ocean minutes after takeoff on Saturday, with 62 people on board.

The Sriwijaya Air flight 182 — a Boeing 737-500 — was heading from Jakarta to the city of Pontianak, on the Indonesian island of Borneo, when it lost contact at 2:40 p.m. local time (2:40 a.m. ET), 11 nautical miles north of Jakarta’s Soekarno–Hatta International Airport. Four minutes into the flight, and amid heavy rains, the plane dropped 10,000 feet in less than a minute before disappearing from the radar, according to the global flight tracking service Flightradar24.
Indonesian Navy divers on Sunday found wreckage from flight SJY 182 after locating a signal from the aircraft’s fuselage. Commander of the Indonesian National Armed Forces, Marshal Hadi Tjahjanto, said that he is confident that the Navy Rigel Warship has located the plane’s fuselage.
As well as debris from the plane, Indonesian police said they have received two body bags, one containing personal effects belonging to victims, and another containing human remains, Jakarta Police spokesperson Yusri Yunus told CNN.

A command post set up at the Kramat Jati Police Hospital in Jakarta to identify the crash victims and search for family members was working to identify the remains, he said.
The focus of the search is between the islands of Laki and Lancang, known as the Thousand Islands chain, about 20 miles northwest of Jakarta. Some 28 ships, five helicopters and two airplanes have been deployed in a joint effort between the Indonesian Navy, Police, Coast Guard and Transportation Ministry. Navy official Abdul Rasyid said the Indonesian Navy has dispatched 10 ships to the surrounding waters off Laki Island and the Armed Forces chief will visit the search area Sunday morning.
On Saturday, Indonesia’s National Search and Rescue Agency (Basarnas) said it had found several pieces of debris believed to be from the missing plane but bad weather and poor visibility had hampered the search overnight.
The crash site was confirmed Sunday morning by the Indonesian National Armed Forces and Navy divers were deployed to search for the wreckage. 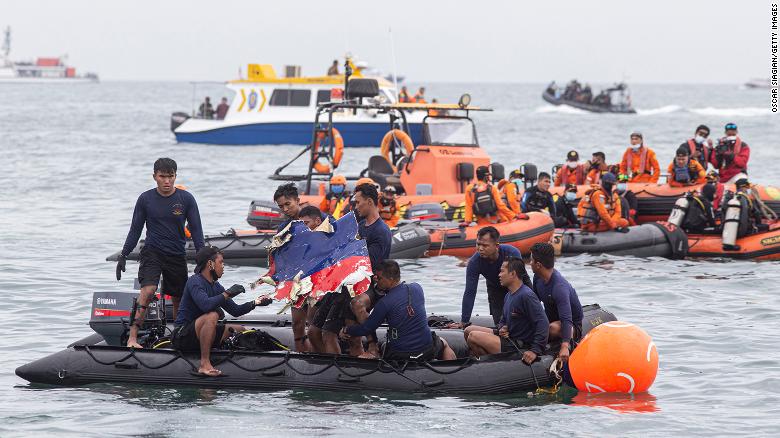 Indonesian rescue teams find part of a Sriwijaya airplane on January 10, 2021 near Jakarta, Indonesia.
Divers retrieved pieces debris from the site that are the same color as the Sriwijaya Air aircraft, Air Chief Marshal Tjahjanto said at a press conference from the John Lie Warship.
A plane registration number, wheels from the landing gear and life vests have also been uncovered, Tjahjanto said, adding that visibility and conditions in the water were good, and the search for victims continues.
Meanwhile, National Transportation Safety Committee (KNKT) teams have begun an investigation into the cause of the crash.
“We sent two investigators with Indonesian Search and Rescue Agency to the sea to do a location survey. We need to find more information on the location, for example to determine what gear we are going to use regarding the underwater terrain we have,” Suryanto Cahyono told CNN.
Investigators have also been sent to Air Traffic Control at the airport, the Meteorology Climatology and Geophysical Agency, and to Sriwijaya Airlines to gather information. 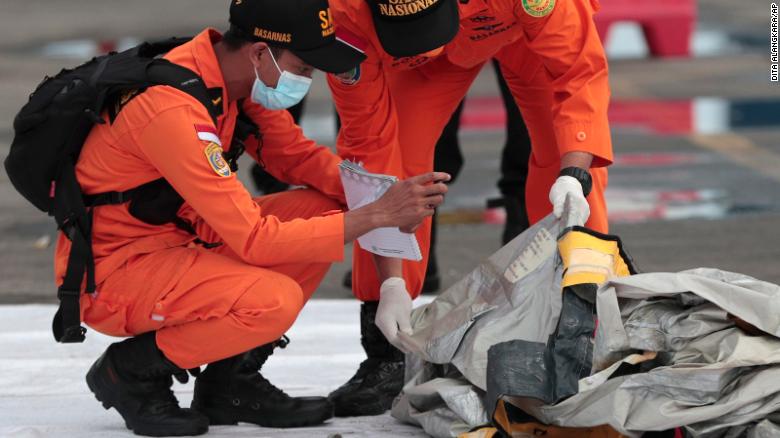 Rescuers inspects debris found in the waters around the location where a Sriwijaya Air passenger jet has lost contact, at the search and rescue command center at Tanjung Priok Port in Jakarta, on January 10, 2021.

The missing plane was carrying 50 passengers — 43 adults and 7 children — as well as 12 crew members, according to Indonesia’s Minister of Transportation Budi Karya Sumadi.
Family members have been gathering at the victim identification center in Jakarta, waiting for news of their loved ones.
A family of five are missing and feared dead, according to an aunt of the family who spoke to CNN. The family released a statement saying that the father, 26-year-old Rizki Wahyudi who worked for the Indonesian Forestry Commission, his 26-year-old wife Indah Halimah Putri, their 7-month-old son, as well as his mother and cousin, were on the flight that crashed.
Married couple Muhammad Nur Kholifatul Amin and his wife Agus Minarni, were also on board the crashed flight, according to the brother of one of the victims who spoke to CNN. 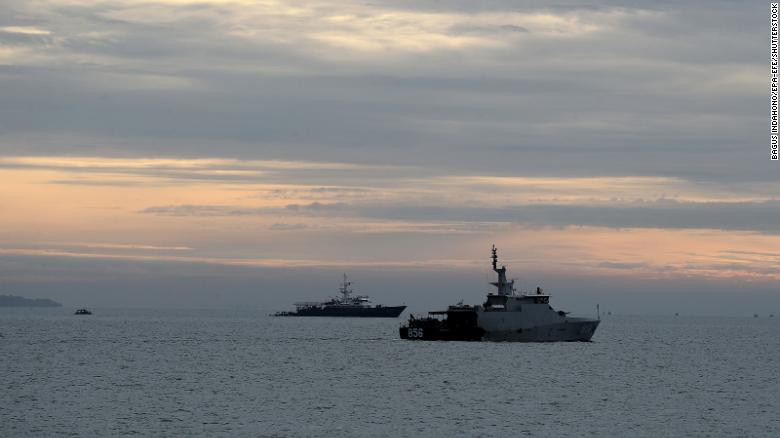 Three fishermen from Lancang Island told CNN they heard an explosion and experienced a sudden large wave around the time the plane went missing.
“I heard very loud explosion. I thought it was a bomb or a big thunder. We then saw the big wave, about 2 meters high, hitting our boat,” said Hendrik Mulyadi.
Hendrik’s colleague, Solihin, described the sound as “a bomb on the water.” They said it was dark and raining at the time.
The men said they didn’t see a plane crash into the sea, but smelled fuel and spotted debris. The men said they returned to shore to report what they experienced to police.
The missing plane was carrying 50 passengers — 43 adults and 7 children — as well as 12 crew members, according Indonesia’s Minister of Transportation Budi Karya Sumadi said. 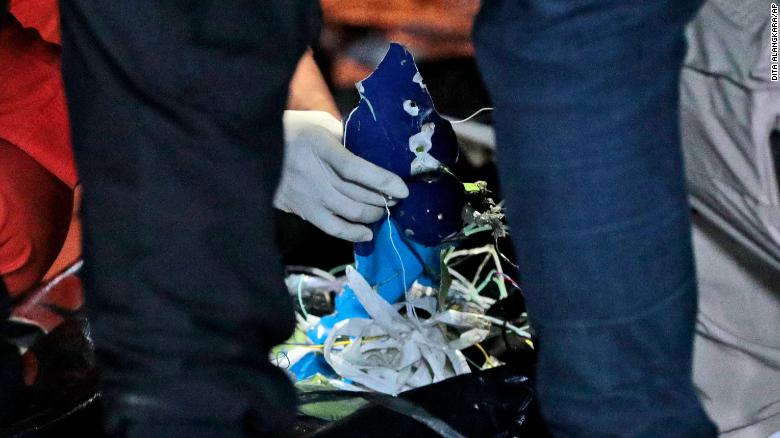 Rescuers examine debris found in the water off Java Island where a Sriwijaya Air passenger jet lost contact, at Tanjung Priok Port in Jakarta on January 10, 2021.
The plane, registered PK CLC, was a 26-year-old Boeing 737-500, according to Flightradar24. Sriwijaya Airlines CEO Jefferson Irwin Jauwena said the plane was in good condition before it took off.
In a statement, Boeing said: “Our thoughts are with the crew, passengers, and their families. We are in contact with our airline customer and stand ready to support them during this difficult time.”
Sriwijaya Air, a low-cost airline and Indonesia’s third-largest carrier, transports more than 950,000 passengers per month from its Jakarta hub to 53 destinations within Indonesia and three regional countries, according to the company’s website.
In June 2018, it was removed from the European Union’s list of banned air carriers, 11 years after it was placed on that list.

This weekend’s crash is the latest to rock Indonesia’s burgeoning airline industry.
In October 2018, Lion Air Flight 610 crashed into the Java Sea in Indonesia after taking off from Jakarta, killing all 189 people on board. The Boeing 737 Max 8 plane was scheduled to make a one-hour journey to Pangkal Pinang on the island of Bangka.
The improper design and certification of the Boeing 737 Max 8 aircraft, coupled with an overwhelmed flight crew battling a malfunctioning system they could not properly identify, led to the crash, according to an October 2019 report by Indonesian authorities.
The Boeing 737-500 plane that crashed on Saturday, does not have the flawed cockpit software that contributed to two fatal crashes of the 737 MAX plane, Reuters reported.
In 2014, Indonesian AirAsia Flight 8501 claimed the lives of all 162 people on board after crashing into the Java Sea, while flying from Surabaya to Singapore.
And in the year before that, Lion Air was involved in two accidents. A Boeing 737 missed the runway on landing and crashed into the sea near Bali, forcing passengers to swim or wade to safety, while another Boeing 737 collided with a cow while touching down at Jalaluddin Airport in Gorontalo on the island of Sulawesi.
In 2007, the European Union banned all 51 Indonesian airlines from its airspace after a Garuda Indonesia plane with 140 people on board overshot the runway in Yogyakarta in March and burst into flames, killing 21 people on board.
Standards have since improved, with all Indonesian airlines cleared from that blacklist by June 2018.
Indonesia, an archipelago nation of more than 13,000 islands, has seen a boom in domestic aviation in recent years, with passenger traffic tripling between 2005 and 2017, according to Australian consultancy the CAPA-Center for Aviation.
The country of 270 million people rely heavily on air transport to commute between islands across the archipelago, which stretches over more than 3,000 miles, around the same distance between London and New York.