(CNN)The first night of the 2020 Democratic National Convention is in the books.

As expected, it was a different looking and sounding production from years past — as the ongoing coronavirus pandemic kept the vast majority of speakers away from the actual arena in Milwaukee.
Nonetheless, the show went on. And I watched every minute! Below the best — and worst — of the night that was.

* Michelle Obama: The two most gifted speakers in the Democratic Party are Obamas. Former first lady Michelle Obama proved that — again — on Monday night, with a powerful speech that hit at the core of what I believe is the most glaring personality flaw in President Donald Trump: A complete lack of empathy. “That’s not just disappointing, it’s downright infuriating,” she said at one point. Obama also offered up her unique perspective on what it actually takes to be a president: How the rigors of the job reveal true character. Perhaps most surprisingly from Obama, who like her husband has generally resisted taking on Trump in aggressive terms, the tone of her speech was frank and at times harsh about Trump’s total lack of qualifications to do the job which he currently holds. “Donald Trump is the wrong president for our country,” she said in the most powerful moment of her speech. “He has had more than enough time to prove that he can do the job, but he is clearly in over his head. He cannot meet this moment.”
* Kristin Urquiza: The daughter of an Arizona man who lost his life to Covid-19 delivered the single most powerful moment of the first hour of the two-hour convention program. And the single most powerful line, about her father: “His only preexisting condition was trusting Donald Trump, and for that, he paid with his life.” Wow. That’s a line you will hear again — and maybe one you will see in a TV ad for former Vice President Joe Biden sometime this fall.
* Andrew Cuomo: The New York governor became one of the most recognizable figures in the country thanks to his daily coronavirus press conferences in the spring, as New York City fought the worst Covid-19 outbreak in the country. His speech on Monday night returned to that theme, with PowerPoint charts showing the decline of coronavirus cases in his state. For Cuomo, who is already being talked about as a potential 2024 candidate if Biden doesn’t win or doesn’t run for a second term, the speech was an effective affirmation of his image as a gifted bureaucrat at a time when the country needs that.
* Former 2020 candidates: It was a very nice grace note to have many of the people Biden beat in the Democratic primary all appear in a single video explaining why they admire Biden and why they believe him to be the right man for this moment. I thought New Jersey Sen. Cory Booker was particularly effective, recounting how, after he and Biden went after each other on the debate stage, that the former VP in a commercial break praised Booker for his ideas and his presence on the stage.
* Bernie Sanders: The Vermont senator did what the Biden team needed him to do. He acknowledged the differences between the two men — especially on health care — but pivoted to note how much they agree on, and how the threat from Trump was so fundamental that differences among Democrats were not worth dwelling on. Will there still be some Sanders supporters who stay home rather than vote for the brand of Democratic politics Biden represents? Sure. But Sanders didn’t make things any worse with that speech. Plus, how can you argue with a background of chopped wood for a speech? 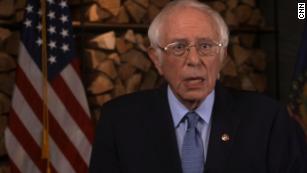 * National Anthem: Kids singing? Dressed in red, white and blue shirts? Oh, you bet. The National Anthem was the emotional highpoint of the first 45 minutes of the convention.
* John Prine: As someone who has loved John Prine’s music for decades, hearing his voice singing “I Remember Everything” — to commemorate all those who have lost their lives to coronavirus — was a high point. Unfortunately, it also reminded me that we lost John to Covid this spring. Ugh.
* Alice Cooper: When Wisconsin Rep. Gwen Moore noted that Milwaukee means “land of plenty” in Algonquian, I can’t imagine I was the only one who thought of Cooper’s scene in “Wayne’s World.” In fact, did you know that “Milwaukee has certainly had its share of visitors. The French missionaries and explorers were coming here as early as the late 1600s to trade with the Native Americans?”

* Gretchen Whitmer: The Michigan governor made Biden’s VP short list. But she didn’t put her best foot forward on Monday night. Speaking from a podium and flanked by flags, Whitmer’s speech looked too traditional for the moment. And her speech was similar — a sort of political color-by-numbers address that ended with the inevitable personal anecdote about some resilient Michigander — was too formulaic. Meh.
* Roundtables: Look, I know it is VERY hard to produce two hours of television when you can’t have people — like, any people — together in one room. And, in theory, Joe Biden or Megan Rapinoe hosting virtual roundtables to talk about police reform or front-line health care workers makes sense. But it felt very, very flat — like a bad panel segment on cable TV where everyone says one thing and then they go to a commercial break. Just sort of lifeless.
* In-your-face symbolism: Former Ohio Gov. John Kasich’s speech began by noting that America was at a crossroads while he was standing — wait for it — at a crossroads. Yeah man, we get it. Two roads diverged in a wood, and all of that. On the bright side: Kasich standing at a crossroads became an instant Internet meme.
* The clapping: After Maggie Rogers performed (she was amazing!) and after Sanders spoke, there was a full screen of people clapping to show their appreciation/agreement. I get the desire to have some sort of reaction to great music or political speeches. And how weird it is when a politician gives a rousing speech and dead silence follows. But you know what’s worse? Weird post-performance clapping via Zoom like we saw on Monday night.