London (CNN Business)Apple (AAPL) has lapped Saudi Aramco to become the most valuable public company on Earth — and don’t expect the rankings to flip again any time soon.
What’s happening: Apple shares jumped more than 10% on Friday after the company reported earnings, reaching an all-time high. The stock rose another 2.5% on Monday to $435.75, giving Apple a valuation of $1.86 trillion.
Saudi Aramco, which had been top of the pile since going public late last year, is worth $1.76 trillion. Before oil prices crashed, it was worth more than $2 trillion.
Apple’s win: The company’s eye-popping run has been powered by its blockbuster results for the April-to-June period. Despite the pandemic, the company posted revenue of $59.7 billion, an 11% increase from the same period last year. It also announced a four-for-one stock split that could help make shares look more affordable.
Now Wall Street is playing catch-up. According to Refinitiv, 29 analysts think Apple shares are worth buying, while just four have a “sell” rating. But Apple’s stock has moved up so quickly that it’s outpacing the consensus price target set by analysts, which stands at $415.90, Bespoke Investment Group observed in a note to clients Monday.
Even if some think Big Tech stocks are too hot, the business climate should favor Apple in the medium term.
“Looking out over the next [six] to 12 months, we believe that investors will continue to place a premium on companies that are able to organically grow sales, especially in a low-growth environment,” Ryan Detrick, chief market strategist at LPL Financial, said in a recent note to clients.
Big Oil’s loss: Oil companies like Saudi Aramco, on the other hand, look structurally disadvantaged as crude prices stay under pressure. Some experts believe oil demand may never fully recover from the pandemic shock.
Brent crude futures, the global benchmark, were last trading at $43.42 per barrel — 34% below where they started the year.
On Tuesday, BP (BP) unveiled a major strategic overhaul alongside a huge second quarter loss and dividend cut. The company is planning to slash oil production and pour money into clean energy. Shares in London rose nearly 8%.

Trump wants a slice of a Microsoft-TikTok deal

After days of whiplash over the future of TikTok, President Donald Trump said he would allow the short-form video app to continue operating in the United States under an American owner, possibly Microsoft. But there’s a big catch.
Trump on Monday set September 15 as the deadline for China’s ByteDance to find a US buyer for TikTok, failing which he said he will shut down the app in the country. 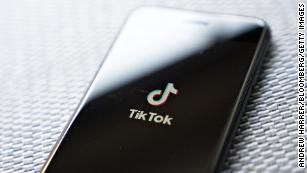 Trump says TikTok sale can go through but only if the US gets a cut
Watch this space: But in an extraordinary declaration, Trump also said any deal would have to include a “substantial amount of money” coming to the US Treasury, my CNN Business colleagues Rishi Iyengar, Oliver Effron and Nikki Carvajal report.
“Right now they don’t have any rights unless we give it to them. So if we’re going to give them the rights, then … it has to come into this country,” Trump said. “It’s a great asset, but it’s not a great asset in the United States unless they have approval in the United States.”
Trump described his proposal as being similar to a lease between a landlord and a tenant, adding that TikTok owes the US for its success.
The president’s requirement that some of the money from the deal go to the US Treasury doesn’t have a basis in antitrust law, according to Gene Kimmelman, a former chief counsel for the US Department of Justice’s Antitrust Division.
“This is quite unusual, this is out of the norm,” said Kimmelman, who’s currently senior adviser to the policy group Public Knowledge. “It’s not unheard of for transactions to have broader geopolitical implications between countries, but it’s quite remarkable to think about some kind of money being on the table in connection with a transaction.”
What’s in it for Microsoft (MSFT)? The software giant confirmed Sunday that it’s pushing forward with talks to acquire TikTok following a conversation between CEO Satya Nadella and Trump. My CNN Business colleague Clare Duffy reports that scooping up TikTok would allow Microsoft to flesh out its consumer offerings, some of which have had mixed success.
Investors seem to like it. Shares closed up 5.6% on Monday.

Want another example of how frothy stock markets have become? Just look at the spectacular rise in Eastman Kodak’s stock, my CNN Business colleague Paul R. La Monica writes.
Kodak (KODK) shares are still up 470% over the past five trading sessions — even after big slides at the end of last week and a drop of more than 30% on Monday.
Investors are excited by the news that the US government is loaning Kodak $765 million to help produce drugs as part of a new pharmaceutical unit.
Much of that enthusiasm is coming from casual day traders. According to data from Robintrack, a firm that follows holding patterns of traders using popular investing app Robinhood, Kodak is the most actively traded stock on the platform in the past week.
But there’s reason for caution, Paul notes. While Kodak has experience producing chemicals for the film business, there’s no guarantee that the company can easily transition to drug-making.
And Kodak has a history of trying to cash in on hot trends. It launched KODAKCoin in response to the bitcoin and cryptocurrency craze in 2018.