Theresa May will attend an emergency EU summit on Wednesday. The aim of this is to resolve the small matter that Brexit is scheduled to happen on Friday.
She has enraged her own Brexiteers by requesting that the Brexit deadline be extended to June 30. We have no idea what the EU’s response will be, but it could result in the UK being forced to participate in the EU’s Parliamentary elections in May. Or it could result in the UK leaving the EU without a deal.
While the outcome of next week is up in the air, it’s worth taking a moment to reflect on the past three years and where it leaves the politics of both the UK and Europe as a whole.
Nothing can ever be the same again. Brexit has sucked so much oxygen out of European politics. EU leaders and officials claim that they are sick of Brexit and Europe has its own agenda to be getting on with.
Fine. But Brexit is still the main event. One EU source told me that they spend “more time thinking about Brexit than anything else. This is no way to live.”
Even in the event that Brexit is cancelled, the EU cannot pretend that the last three years didn’t happen. Nor can it ignore the reasons for it happening.
Rob Ford, a politics professor at the University of Manchester, believes that “a series of new divides are emerging across Europe and the rich world. These include, but aren’t limited to, education, national identity, immigration, multiculturalism, ethnicity, and social values.”
The logic goes that Brexit, a binary vote that allowed an electorate to give the elected a bit of a kicking, emboldened this kind of ultra-partisan politics.
Helpfully, there is data to back this up. The European Social Survey, a non-partisan research project that tracks the views of Europeans, asked citizens from other member states how they would vote in a similar referendum to the one held in the UK in 2016.
The numbers should still alarm europhiles. Rory Fitzgerald, Director of the European Social Survey, told me that while the UK is an outlier, “with around a fifth of those in a number of other member states willing to support an EU-exit of their own it would be wise for those supportive of the EU project to listen carefully to their concerns.”
The prospect of more exits from the bloc isn’t the EU’s only problem. The ESS survey, conducted in 2016-17, suggests that there was “little support in any country for significant further EU integration. Perhaps other ways than further integration need to be found to increase support for the EU project.”
For an institution that has always sought to deepen continental unity, this is a problem. 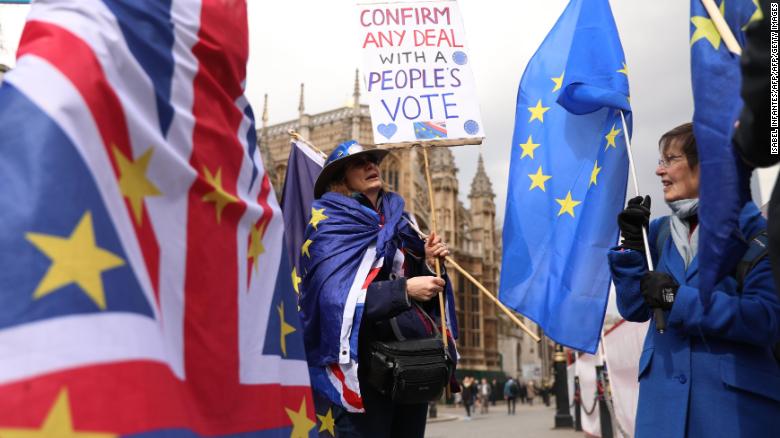 Even in the event that Brexit is cancelled, the EU cannot pretend that the last three years didn’t happen.

Displeasure with the EU has allowed populists on the left and right to make considerable gains in national elections since 2016.
In 2017, the National Front’s Marine Le Pen made it to the final two in France’s presidential election, losing to Emmanuel Macron. Since taking office, Macron has suffered at the hands of populists dissatisfied with his centrism, most recently in the form of the “yellow vest” protesters.
In the German elections later that year, Angela Merkel’s center-right CDU suffered losses to the far-right, anti-EU Alternative for Germany (AfD). For the first time since World War II, a far-right party took seats in the Bundestag and were officially recognized as the main opposition.
Italy and Austria have both elected leaders who are cooler than their predecessors on the EU. Many in Brussels think that this surge all started with Brexit.
The problem requires urgent attention when you consider that EU parliamentary elections take place next month. If the UK participates, the EU will face the prospect of seats being taken by euroskeptics that make Theresa May look like a flag-waving Europhile.
Back across the channel, Brexit has left the UK’s democratic system in a mess. The referendum asked a binary question: leave the EU or stay in. The problem with asking a question like this is that it can be interpreted any number of ways, including: “Are you happy with the way your country is run?”
When direct democracy collides with parliamentary democracy like this, politicians must accommodate what the public tells them. Tom Tugendhat, a prominent Conservative MP and Chairman of the Foreign Affairs Select Committee, doesn’t think that the UK has managed to do this. He believes that Brexit has caused a competition between two forms of democracy that haven’t yet been reconciled.
“Parliament’s indirect democracy is struggling to accommodate the stark clarity of the direct instruction of voters in 2016. As representatives, we need to find ways to accommodate direct instructions and reflect them in the laws that we pass. If we don’t, then our democratic system is in danger of losing legitimacy.”
This is partly why the UK has ended up in this mess. In the UK’s electoral system — a winner-takes all form of politics — the candidate with the most votes takes the seat. The rest of the votes count for nothing.
Take the Prime Minister’s own parliamentary constituency of Maidenhead as an example: May, the Conservative candidate, won 64.8% of the vote in her seat in the 2017 general election. The remaining 35.2% was split across 12 parties. Those people are not represented in parliament.
This pattern is repeated in various ways across the country. That means that quite a lot of the country are represented by people they do not agree with. In 2015, the year in which May’s predecessor as PM, David Cameron, secured a parliamentary majority with only 36.9% of the popular vote.
In the UK Parliament, each MP has one vote when approving legislation. This means that on the question of Brexit, the will of parliament cannot possibly reflect the will of the people.
As tribalism took over the UK’s politics, the language directed at MPs both from their colleagues and the public has been unedifying: traitors; liars; mutineers; saboteurs. The low point was an interview given to a national newspaper by an unnamed MP, who talked about stabbing the prime minister in the back.
A lot has been said that cannot be unsaid. The two main parties are in open disagreement with one another and themselves, as both are trying desperately to make sense of the result of the referendum.
The traditional method of holding an election is unlikely to break the deadlock.
Untangling Brexit from a general election campaign would be near impossible. Back to Rob Ford, and the new political divides he described earlier. Ford believes that “The EU referendum mobilized many of these. As a result, there are now strong Leave and Remain political identities, which may have a lasting impact.” He says that this has led to the public having less of an attachment to traditional political parties, in favor of their Leave and Remain identities.
Ford believes that this makes the result of any election highly unpredictable while voters are being pulled further into the mire of identity politics.
How does this get fixed? A new electoral system might help: “A more proportional system can better accommodate a diversity of division and allegiances. Forcing people with fundamental disagreements into two big tent parties is a recipe for chaos, as we are seeing.”
So, the UK needs to rip up its electoral system to get out of this mess. What about the EU?
Marietje Schaake, a liberal member of the European Parliament, shares Rory Fitzgerald’s concerns that Brexit has emboldened anti-EU populists that are still operating within the EU. “Since the chaotic political process after the Brexit, nationalist politicians all over Europe have changed their ambitions promptly. From calls for ‘Frexit,’ ‘Nexit,’ ‘Grexit,’ they now all opt to change or destroy the EU from within, instead of seeking to leave.”
She believes that the only way to stop this is if europhiles across the political spectrum — conservative, liberal, social-democratic and green parties — “reach their voters, with constructive agendas to change the EU.”
Hard Brexit, soft Brexit, remain, no deal, whatever. The Brexit problem has left a never-ending list of unanswered questions for politicians and citizens across the continent.
If they are not addressed soon, European politics could find itself in an even bigger mess. It’s staggering that three years on, so many of the political elite are still dragging their heels.

2,656 thoughts on “SVE NEWS & CNN Sharing Series – After Brexit, Europe will never be the same again”