Orlando, Florida (CNN)A slew of ambitious Republicans eyeing bids for the party’s 2024 nomination used the two days ahead of former President Donald Trump’s appearance at this year’s Conservative Political Action Conference to begin staking their own claims as the eventual leaders of the movement built around the former President.

Though it will take years for the 2024 race to fully take shape, this year’s CPAC in Orlando, Florida, offered a window into a GOP primary dominated by a new Republican Party built around the grievances that animated Trump’s campaigns and his presidency.
Speakers embraced Trump’s lies about the 2020 election being rigged. Organizers built this year’s event in Trump’s adopted home state around the theme of liberal “cancel culture” in the wake of Trump being banned from social media platforms. The crowd booed reminders to wear masks, much like Trump eschewed his own health experts’ recommendations. 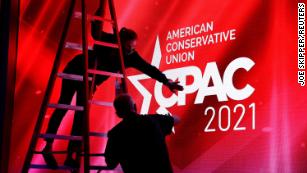 Fact checking CPAC: speakers make false claims about the election, the Capitol attack, immigration, Covid, and The Muppets
“Let me tell you right now, Donald J. Trump ain’t going anywhere,” Texas Sen. Ted Cruz said Friday.
And CPAC attendees seemed to agree.
“There’s nothing he can say that can make me change my mind about him,” Bob Paxton of Ocala, Florida, told CNN.
Red “Make America Great Again” hats and pro-Trump paraphernalia have been ubiquitous, and every CPAC attendee who spoke to CNN said they would support Trump if he decides to run in three years. The unofficial, organized efforts to generate buzz for GOP presidential candidates that were a hallmark of CPACs during the Obama years were nowhere to be found this year.
The weekend in Orlando demonstrated that Trump is poised to be at the center of Republicans’ 2024 nominating contest, whether he decides to run again as the clear favorite or instead chooses to play a kingmaker role, setting the terms of the race and determining which candidates are persona non grata in a GOP built in his image.

The clearest illustration of a conservative base that remains fiercely loyal to Trump came from Missouri Sen. Josh Hawley, who had objected to certifying Electoral College votes from key swing states, effectively attempting to disenfranchise those states’ voters and overturn the results of the 2020 election. He bragged about his efforts at CPAC, claiming he was standing up for “election integrity.”
In Washington, Hawley has faced backlash over his efforts on January 6, the day a pro-Trump mob emboldened by the former President’s speech stormed the Capitol. But in Orlando, he was treated as a hero.
“I’m not going anywhere. I’m staying right here. I’m gonna stand up for you,” Hawley said, to the loudest cheers of the day Friday.
He also pointed to the backlash he’s faced, which included a publisher canceling plans to publish a forthcoming book that has since been picked up by another publisher, as an example of liberal cancel culture. “I thought it was an important stand to take, and for that the left has come after me. They tried to silence me. They canceled a book,” he said.
At this year’s CPAC, Republicans who have broken with Trump — such as Utah Sen. Mitt Romney and Nebraska Sen. Ben Sasse — and those on ambiguous terms with the former President — including former Vice President Mike Pence, who rejected Trump’s pressure to try to overturn the election results, and former United Nations ambassador Nikki Haley, who has offered tempered criticism — were not on hand.
Also largely ignored: President Joe Biden, who was mentioned roughly as often as toy-maker Hasbro’s decision to drop the “Mr.” in front of the name of its famous “Potato Head,” favoring the gender-neutral name. None of the major speakers attempted to make a detailed case against Biden’s $1.9 trillion plan to combat the coronavirus pandemic and stimulate the economy that passed the House early Saturday morning.
New York Gov. Andrew Cuomo faced just as much criticism over his handling of the pandemic as Biden faced.
“Florida is like an amazing woman. Adventurous, beautiful, mostly sunny, sometimes a little crazy, and always here to encourage and support success,” Florida Rep. Matt Gaetz said. “By contrast, New York is like a bad ex-husband — mean, won’t let you go out to dinner; you’re less safe, financially spiraling downward, and they may kill your grandparents.”

The breakout star of CPAC’s first days might have been South Dakota Gov. Kristi Noem, who was among the only speakers to articulate a vision of conservatism that — while consistent with Trump — sought to more broadly define the party’s principles.
“We must more closely articulate to the American people that we are the only ones who respect them as human beings,” Noem said. “That we are the only ones who believe the American people have God-given rights. We are not here to tell you how to live your life, how to treat you like a child or criminal because you go to church or you defend yourself.”
Noem decried what she said is an “organized, coordinated campaign to remove and eliminate all references to our nation’s founding and many other parts of our history” — seizing on Trump’s complaints about progressives who have attempted to remove some honors given to slave-owning founding fathers and Confederate leaders from the public square.
“Our founders had their flaws, certainly. But to use those flaws to condemn their ideals and the greatest Constitution the world has ever seen is both unjust and it’s self-defeating,” the Republican governor and former congresswoman said.
Noem also touted her state’s lax policies to combat the coronavirus pandemic and took aim at Dr. Anthony Fauci, the government’s leading infectious disease expert, whom she claimed overshot the number of hospitalized people South Dakota would face at the height of the pandemic.
“I don’t know if you agree with me, but Dr. Fauci is wrong a lot,” Noem said to loud cheers.
And a story about her late father’s pickup truck — and the life lessons she discovered he had left behind in the truck’s cab — brought tears to the eyes of several attendees.
“I was getting teary-eyed,” Kensy Pelo, an attendee from outside Portland, Oregon, told CNN.
The first speaker to attack Biden at length was Kimberly Guilfoyle, the girlfriend of Trump’s son Donald Trump. Jr., well after most 2024 prospects had spoken Friday. And while Trump Jr. used his speech to criticize Biden, he also took aim at Trump’s rivals within the Republican Party. He hammered Wyoming Rep. Liz Cheney, the No. 3 House Republican who voted to impeach Trump after the January 6 insurrection, in personal terms with a reference to Cheney’s father, former Vice President Dick Cheney, shooting a friend in the face in a 2006 hunting accident.
“Liz Cheney and her politics are only slightly less popular than her father at a quail hunt,” Trump Jr. said.

To the extent policy was discussed, it often focused on Trump’s priorities: Combatting the rise and reach of “big tech,” enacting hard-line immigration policies and talking tough on China.
Arkansas Sen. Tom Cotton vocalized conservatives’ hard line on immigration, baselessly trying to stir up fear about Democrats giving voting rights to undocumented immigrants “in time for what they hope will be Kamala Harris’ reelection campaign.”
Florida Gov. Ron DeSantis, whose popularity among Republicans has soared amid his rejection of strict measures to combat the pandemic, bragged that Florida had not made changes to how it held the 2020 election to make it easier for people concerned about their health to vote. 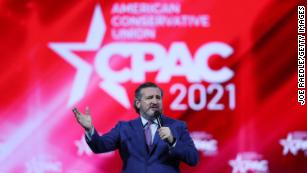 ‘They restricted our freedoms’: CPAC speakers push back against Covid restrictions
“I rejected pressure to make hasty and ill-conceived changes to our election administration like mass mailing of unsolicited ballots. And the result? On election night, by midnight, the state of Florida had counted, tabulated and put out 11 million votes,” DeSantis said.
Speakers mocked mask-wearing, even as attendees were reminded that the hotel hosting CPAC required them. Cruz said he had two masks in his pocket, but lambasted the notion that wearing masks has become a cultural matter pushed by Democrats.
“How much virtue do you want to signal? This is just dumb,” he said.
Republicans also reveled in the criticism they’ve faced since January 6 — connecting with a palpable sense of grievance within the audience that Trump himself has often played to.
“In the last few months we’ve been called clowns, and deplorables, and ignorant rednecks, we’ve been called the evil resistance. The New York Times thinks I’m the worst secretary of state of all time,” said Mike Pompeo, Trump’s secretary of state, referencing commentary from the newspaper’s opinion section.
In his speech, Florida Sen. Rick Scott, who chairs the Senate GOP’s campaign arm for the 2022 midterm elections and has been a staunch Trump ally, made clear that he’s not willing to wade into primary fights between those in the party who have criticized the former President and his allies.
“I’m not going to mediate anything. Instead, I’m going to fight for our conservative values,” he said.
Scott, like Hawley, also hammered tech companies, characterizing Twitter’s decision to ban Trump as ominous for all conservatives — even though Trump was banned for tweets that glorified and incited violence, not for expressing political views.
“If they can silence a former President,” he said, “what makes you think you’re not next?”