US President Donald Trump has said Joe Biden is “against God”, ramping up attacks on his Democratic rival and foreshadowing an ugly election battle.

The remarks, during a trip to Ohio, came as Mr Trump tries to make up ground in the crucial Midwestern states that were his path to victory in 2016.

The former US vice-president has spoken frequently about how his faith helped him cope with the deaths of his first wife and daughter in a 1972 car accident.

His campaign spokesman Andrew Bates said in a statement on Thursday: “Joe Biden’s faith is at the core of who he is; he’s lived it with dignity his entire life, and it’s been a source of strength and comfort in times of extreme hardship.”

The president said of Mr Biden earlier in the day in Cleveland, Ohio: “He’s following the radical left agenda.

“Take away your guns, destroy your Second Amendment. No religion, no anything, hurt the Bible, hurt God.

Mr Trump has been accused of using the platform of the presidency for political gain by injecting campaign-style rhetoric into taxpayer-funded official engagements intended to communicate US government policy.

At a washing machine factory later on Thursday, the president kept up the onslaught on his challenger. 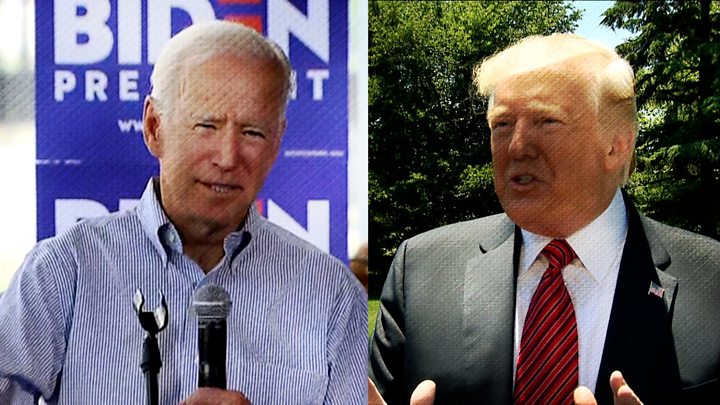 “I wouldn’t say he’s at the top of his game,” the president said.

Both the Trump and Biden campaigns have traded accusations that their candidate has dementia. Mr Trump is 74 and Mr Biden 77.

In an advertisement released by the Trump campaign this week, the Democrat was depicted as “hiding” alone in his basement, using an image that had been edited to remove several other people.

Religion has previously come up in this campaign. Mr Biden accused the president of cynically using a Bible for a photo op outside a church in early June after protesters – who were described by journalists at the scene as peaceful – had been forcibly dispersed by law enforcement outside the White House.

Throughout his tenure, Mr Trump has enjoyed a mostly strong backing from evangelical Christians.

In his list of “six promises” for a second term unveiled in Ohio on Thursday, Mr Trump focused heavily on economic recovery, vowing to turn the US into a premier medical manufacturer, launch “millions” of manufacturing jobs and bring back American jobs and factories from abroad.

The pledges echo many of those from his 2016 campaign, a platform of economic populism often credited with his wins in swing states like Michigan, Wisconsin, Pennsylvania and Ohio.

But the president’s message of prosperity has been thwarted this time around by the coronavirus outbreak. The US economy shrank at a 32.9% annual rate between April and June as the country faced lockdowns and spending cuts during the pandemic, marking the steepest decline since the government began keeping records in 1947.

Now, polls show Mr Biden with leads in Michigan, Pennsylvania and Wisconsin – three industrial states his Republican rival won by margins of less than 1% to claim victory in 2016. And in Iowa, Ohio and Texas, where Mr Trump won last time by 8-10%, he is currently neck-and-neck with Mr Biden.