North Korea has suspended plans for “military action” against South Korea, according to state media.

There have been rising tensions between the two countries in recent weeks as groups in the South planned to fly propaganda leaflets over the border.

There had been threats by the North to send troops into the demilitarised zone (DMZ) at the intra-Korean border.

But at a meeting chaired by leader Kim Jong-un, state media said the decision was taken to suspend military action.

The Central Military Commission made its decision after taking what it called the prevailing situation into consideration.

His sister, Kim Yo-jong, had given orders to the army more than a week ago, stating that they would “decisively carry out the next action” in part because of what Pyongyang said was Seoul’s failure to stop activists sending anti-regime leaflets over the border attached to balloons.

Why has there been a recent escalation of tensions?

Since a 2018 thaw, the long-standing rivals had been making efforts to improve ties and maintain dialogue.

But the relationship appeared to have deteriorated rapidly in recent weeks.

In part, the spat is over South Korean defector groups sending leaflets into the North.

Usually sent into the country via balloons, they usually carry leaflets, USB sticks or DVDs with criticism of the Pyongyang regime, as well as South Korean news reports or even Korean dramas.

All of this is aimed at breaking the North’s control on domestic information with the hope that people might eventually topple the regime from within.

The North argues the leaflets violate an agreement between the two countries to avoid confrontation.

The South Korean government has already tried to stop groups sending leaflets across the border, arguing their actions put residents near the border at risk.

Earlier this month, North Korea cut off all inter-Korean communication lines with the South, including a hotline between the two nations’ leaders.

On Friday, North Korea blew up the Inter Korean Liaison Office, on its side of the border, which was set up two years ago to ensure regular dialogue between the two countries.

However, the tone of Tuesday’s meeting in North Korea appears to indicate a de-escalation in rhetoric. 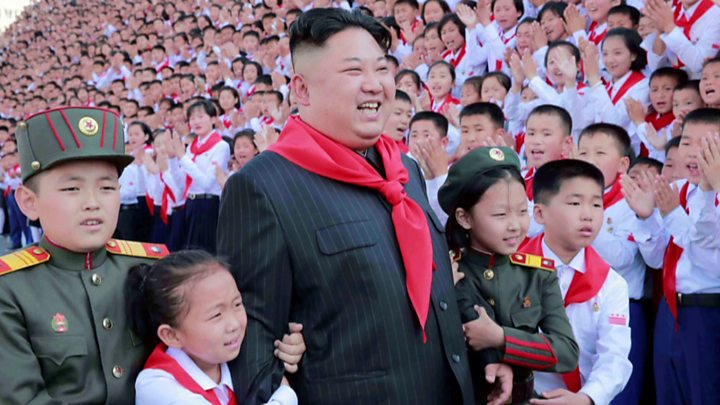 WATCH: Ayshah finds out what it’s like to grow up in North Korea

At the start of the year, Kim Jong-un said he was ending the suspension of nuclear and long-range missile tests put in place during talks with the US.