Images seen by Express.co.uk show a Dutch owned trawler landing a huge catch of pelagic fish at Peterhead in Scotland before being transported onto a waiting French lorry to be taken immediately to the continent. With EU fisheries allowed to have continued unfettered access to UK waters during the Brexit transition period, a trawler called The Bressay Bank has been pictured landing thousands of tons of fish caught off the north coast of Britain.

Alan Hastings of Fishing for Leaves said: “The catch from Britain’s northerly waters, around 600 plus miles from continental Europe is seen being landed into a French lorry, this will take the fish straight to the continent.

“This means these fish caught by an EU boat in British waters will bypass the local Peterhead market and all the local processors in Europe’s biggest fishing port.”

Mr Hastings added: “Although the trawler is registered as French its parent company is the Dutch giant Parlaviet van der Plas.”

EU member states are putting pressure on the EU to make access to the waters post the 2020 transition period a requirement for any trade deal.

But British fisheries are calling on Boris Johnson take a firm stance against the demands.

The Dutch trawler off-loaded onto a French lorry (Image: Fishing for Leave) 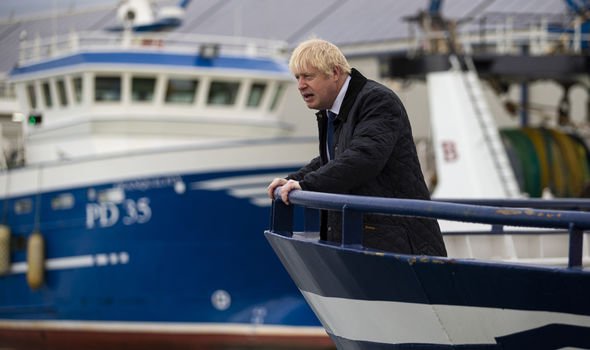 Boris Johnson looks over the edge of a fishing boat (Image: GETTY)

The calls come amid fears the Government may sacrifice promises to defend British waters for open access to European financial markets for the City of London.

Dubbed the “fish for finance” deal is one of the options being offered by EU negotiators.

The City is desperate to complete and open access arrangement with the European financial services market, but the transaction may mean that in return French, Dutch and Spanish boats would be allowed to maintain their access to British fishing grounds.

Financial services are a huge industry for the UK, and dwarf the fishing industry. 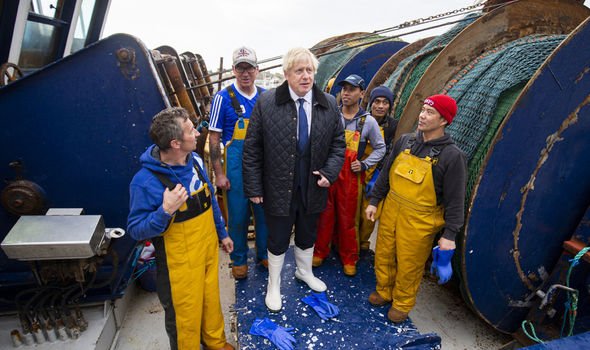 Fears the Government protect the City of London over fisheries is making UK fishermen, who overwhelmingly voted for Brexit, very nervous.

At present Mr Hastings pointed out the EU makes off with on average 75 percent of the overall UK fishing quota.

This is crippling the ability of the British fleet to stay competitive and is infuriating local fishermen as Britain contributes 50 percent of the waters and 60 percent of the catches to the common EU pot.

Mr Hastings added: “To add insult to injury big EU owned but UK registered ‘Flagship’ companies muscled out struggling British family fishermen and now hold half of the paltry 25 percent Britain does get.”

Flagships were foisted upon the UK after the European Court of Justice (ECJ) overruled the Thatcher governments 1988 Merchant Shipping Act that sought to clamp down on EU fishing companies domiciling in Britain.

In the infamous Factortame case, the ECJ ruled that the strong ‘Economic Link’ conditions of the Act prohibited EU Freedom of Establishment provisions.

Mr Hastings continued: “Sadly under pressure from the Flagship dominated NFFO (National Federation of Fishermen’s Organisation) the Government is doing nothing to reinstate Mrs Thatcher’s Economic Link to ensure that British fishing vessels are majority British owned, crewed and land, sell and process the majority of their catches in Britain so the country sees genuine economic benefit delivered.”

The EU have been taking large catches from UK waters (Image: Fishing for Leave)

Mr Hastings outlined the strategy the UK fishermen want the Government to take in the coming negotiations.

The member of Fishing for Leave added: “If the Government wants to genuinely take back control of a £6-8 billion industry, to level up regions and do so through rejuvenating coastal communities after decades of EU policies designed to facilitate the asset stripping of Britain.

“The Government must revise the Fisheries Bill to legislate that in future foreign-flagged boats should only be granted access post-Brexit on a strictly annual basis and only if the UK receives a reciprocal value of fishing opportunities for in EU waters.

“Any and all of the limited number of EU vessels licensed to access British waters for the year should have it as a requirement of that licence that all their catch is landed, sold and processed in Britain.