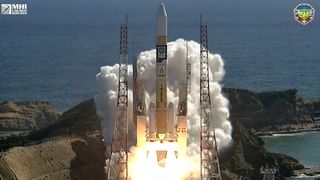 The rocket lifted off from the Tanegashima Space Center in Japan at 10:19 p.m. EDT Monday (0219 GMT, or 11:19 a.m. local time on Tuesday, Oct. 26), according to Mitsubishi Heavy Industries, which builds and operates H-2A rockets the Japan Aerospace Exploration Agency (JAXA). “It was really beautiful launch,” the company tweeted after a successful liftoff.

The satellite, QZS-1R, is a replacement for the Quasi-Zenith Satellite System 1 satellite first launched in 2010. The official QZSS website lists four satellites in the constellation: QZS-1, QZS-2, QZS-3 and QZS-4.

The QZSS constellation will eventually consist of a total of seven satellites that fly in an orbit passing through a near-zenith (or directly overhead) above Japan, and QZS-R1 is meant to share nearly the same transmission signals as recent GPS satellites, according to JAXA. It is specially optimized for mountainous and urban regions in Japan, JAXA said.

Mitsubishi Industries launched the satellite on an H-2A 202 rocket. The launch system has been operational since 2003 and has sent satellites to locations such as Venus (Akatsuki) and Mars (Emirates Mars Mission). This was the first launch of the H2-A since Nov. 29, 2020, when Japan launched an advanced relay satellite with laser communications tech into orbit.