Researchers honoured for game-changing methods to neatly couple molecules, including reactions that can be run in living cells. 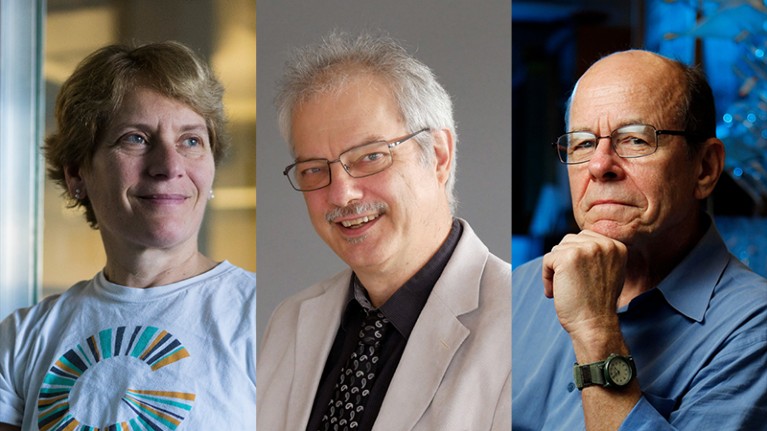 Three chemists who pioneered a useful technique called ‘click chemistry’ to efficiently join molecules together have won this year’s Nobel Prize in Chemistry.

Barry Sharpless at Scripps Research in La Jolla, California, and Morten Meldal at the University of Copenhagen in Denmark laid the foundation for click chemistry and independently discovered a pivotal reaction that could be used to link two molecules — an azide and an alkyne — with relative ease1,2,3. This reaction has been applied to develop a host of different molecules, including modified plastics and potential pharmaceuticals.

The third winner, Carolyn Bertozzi at Stanford University in California, used click chemistry to map the complex sugar-based polymers called glycans on the surface of living cells without disturbing cell function4. To do this, she developed reactions called bioorthogonal reactions, which are now being used to aid cancer drug development.

Speaking by telephone during this morning’s Stockholm press conference, Bertozzi said she had been “absolutely stunned” by the early-morning call. “I’m still not entirely positive that it’s real, but it’s getting realer by the minute,” she said.

Click chemistry has been applied to DNA sequencing technologies and materials science, as well as aiding basic research into cell function and the discovery of new biomolecules.

But that’s only the beginning, Bertozzi told reporters. “I think the field of click chemistry is still in its early stages,” she said during the prize announcement. “There’s probably many new reactions to be discovered.” The value of click chemistry is its simplicity, she added, with high efficiency and relatively little waste.

“In Carolyn Bertozzi, Barry Sharpless and my groups we changed some concepts in chemistry which allow you to do things that were never possible before,” Meldal tells Nature.

This is a second Nobel Prize for Sharpless, who won a chemistry Nobel in 2001 for developing chiral catalysts. That same year, Sharpless wrote a review for the journal Angewandte Chemie in which he argued that chemistry needed to move towards simpler reactions, with less waste in the form of unwanted by-products. “Just a handful of good reactions are needed to assemble vast numbers of highly diverse organic molecules,” he and his co-authors wrote.

Sharpless formulated the concept of click chemistry around the year 20001 as a way to design pairs of molecules that react only with each other, and in an irreversible way. This means forming a strong, covalent bond, in contrast with the selective but weaker lock-and-key interactions typical of many biomolecules, says Per-Ola Norrby, a computational chemist at at AstraZeneca in Gothenburg, Sweden, who worked in Sharpless’s group in the 1990s. A click reaction “is so much downhill in terms of energy, that it never goes back”, he adds. Such reactions should also also occur in mild solvents, such as water, and produce harmless byproducts.

“It’s extremely difficult to do one kind of chemistry in the presence of another kind,” says Meldal. “We did something which is completely orthogonal to all existing chemistries.”. The term orthogonal, meaning perpendicular (in geometry), refers to reactions that can proceed independently in the same medium without affecting each other. Bertozzi coined the term ‘bioorthogonal’ in the early 2000s to refer to reactions that occur without interfering with the chemistry of a living cell.

Meldal says that in 2001, he and his collaborator Christian Tornøe discovered the azide-alkyne reaction accidentally while working at the Carlsberg Laboratory in Valby, Denmark2. Happenstance, he says, is how many major discoveries occur. “You are doing something you cannot imagine.”

That reaction, which Sharpless discovered independently3, became known as the prototypical example of click chemistry.

Chemists have subsequently managed to make click chemistry work between molecules of increasing size and complexity. “I am particularly fond of making bridges in peptides and protein structures to stabilize their properties,” Meldal says.

Knud Jensen, a chemical biologist at the University of Copenhagen who was Meldal’s first student, says the technique spread rapidly across all areas of chemistry and even in materials science. “Everybody does the click,” he says.

Around the same time, Bertozzi’s group had been working on understanding glycans, and searching for ways to label the sugars on cells without damaging the cells themselves. Click chemistry seemed to offer a possibility, but the copper used to catalyze the reactions could be toxic to cells.

In 2003, Bertozzi returned from a conference with an idea for dispensing with copper by using alkynes that have been constrained into a ring, says Nicholas Agard, a senior scientist at Genentech in South San Francisco who was a graduate student in Bertozzi’s group at the time. The ring bends the alkyne out of its normal linear form, placing it under strain. “The question was: is that energy releasable in an effective way?” he says.

Agard spent hours digging around in the library looking for some precedent for the idea that ring strain could be harnessed for a non-toxic form of click chemistry. He eventually found a 40-year-old paper written in German that seemed to have some relevance. “I could understand three things in it: ‘phenyl azide’, ‘cyclooctyne’, and ‘explosion’,” he says.

But Agard and his colleagues were able to find a nonexplosive way to harness ring strain for click chemistry, and the lab set about applying the technique to label cells in zebrafish and mice. It was an exciting time, says Pamela Chang, a chemical biologist who earned her PhD in Bertozzi’s lab in 2010. “We knew we were part of something special,” she says. “It made for a really amazing environment for all of us.”

By then, Bertozzi was busy traveling to give talks and running a large research group, but made time to meet with lab members and help them edit their papers. She is an advocate for women in science and, in particular, a role model for female chemists, says Chang, who notes that at one point 50% of the lab’s members were women — an unusually high proportion in the chemistry department at the time.

“She gave us a lot of freedom,” says Chang, who now uses click-chemistry approaches in her own research on bacterial enzymes and metabolism in gut microbiomes at Cornell University in Ithaca, New York. “If you needed advice or help, she would drop everything and make time for you.”

Sharpless, too, is known for being approachable, says Norrby: “You don’t notice that he has a Nobel.” He was also not the kind of boss who required his staff to work 80-hour weeks, he says, something Norrby appreciated when he started his career and had family obligations. “He was totally cool with that, and that’s not common in the high echelons of research.”

Meldal says that he hopes his prize will encourage young people to pursue a career in chemistry. The field is crucial for many of society’s challenges and, together with physics, offers “a full description of what is around us”, he says.