New York (CNN Business)Tesla reported record earnings that blew past Wall Street forecasts, as the company was able to shake off the effects of a shortage of computer chips and other raw materials that has dogged the auto industry in recent months.

The company reported operating earnings of $2.1 billion, up 30% from its previous record earnings in the second quarter, with earnings per share 17% better than the consensus of analysts surveyed by Refinitiv. It marked the sixth straight quarter that Tesla posted record earnings on that basis.
Revenue rose 15% to $13.8 billion, roughly in line with estimates.
The results stand out because Tesla for the first time topped $1 billion in operating earnings only two quarters ago, in this year’s first quarter. Even by a more strict accounting method, the company posted net income of $1.6 billion, up 42% from the second quarter figure, and nearly four times what it earned on that basis a year earlier.
Still, the company warned that it is still experiencing problems with getting chips and other raw materials, despite its success overcoming those issues in the third quarter.
“A variety of challenges, including semiconductor shortages, congestion at ports and rolling blackouts have been impacting our ability to keep factories running at full speed,” said the company in its earnings statement. “We continue to run our production lines as close to full capacity as conditions allow. While sequential growth remains our goal, the magnitude of growth will be determined largely by outside factors.”
At its recent annual meeting, CEO Elon Musk warned that dealing with supply chain issues has been costly.
“We are seeing significant cost pressure in our supply chain,” he said at that time. “I mean the sheer amount of money we’re spending on flying parts around the world is just not great but hopefully temporary.”
But Tesla was able to raise prices on its cars, despite increased competition from electric vehicles now being offered by traditional automakers such as Volkswagen (VLKAF), General Motors (GM) and Ford (F). The company had previous disclosed that it had record sales in the quarter, up 20% compared to the previous three months, and up 73% from the year-earlier period. 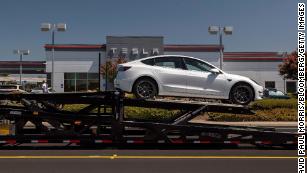 Tesla sees jump in third quarter production
The strong results are a sign of the growing shift by car buyers towards electric vehicles, said Daniel Ives, technology analyst for Wedbush Securities.
“These delivery numbers, combined with this ‘impressive earnings beat,’ speaks to an EV demand trajectory that looks quite robust for Tesla heading into fourth quarter and 2022,” he wrote in a note to clients.
Even so, shares of Tesla (TSLA), which are up 22% so far this year, slipped slightly following the report, as its strong results were tempered by that warning.
Musk was not on the conference call with investors that the company held following the release of its results. CEOs typically are on such calls, but he signaled his plan not to do so three months ago. Musk, who is also CEO of SpaceX and hosted Saturday Night Live in May, said the hour-long calls took too much of his time.
“I think going forward, I will most likely not be on earnings calls unless there’s something really important that I need to say,” he said in July.
Musk’s comments have been notable on past calls, including an April 2020 rant against stay-at-home orders meant to battle the Covid pandemic, which he referred to as “fascist.”
In a 2018 call he battled with and mocked analysts, cutting off a response to one analyst’s question by another executive to say, “Boring, bonehead questions are not cool. Next?”
Wednesday’s call was informative but far less exciting — or informative — without Musk on the call.