London (CNN)Even by British standards, the pomp and pageantry of the State Opening of Parliament is off the scale.

The event — which marks the monarch’s symbolic association with the British legislature — includes a grand carriage procession, a particularly heavy crown, and a part where the sovereign must read out a speech that the government writes on her behalf.

The latest version of the jamboree, which takes place on Monday, has an overlay of political controversy — there hasn’t been one for nearly two years, and this year it was preceded by a suspension of parliament so long that it was deemed illegal.

Fortunately, that drama was all sorted out and Queen Elizabeth II will enter the Sovereign Gate on Monday in a perfectly constitutional manner.

Here’s how the whole event will go down.

The state opening of parliament is an event unique in the UK ceremonial calendar in that it brings together in one place the three branches of the government — the legislature, the executive and the judiciary, along with the monarch.

The last full ceremonial State Opening of Parliament was on May 18, 2016, when former Prime Minister David Cameron launched a parliamentary session shortly before the June 23 Brexit referendum that spelled the end of his premiership.

There was another one on June 21, 2017, when Theresa May was PM. But because that event was precipitated by a snap election there wasn’t time to organize a full ceremony, so only a “dressed down” version was held. 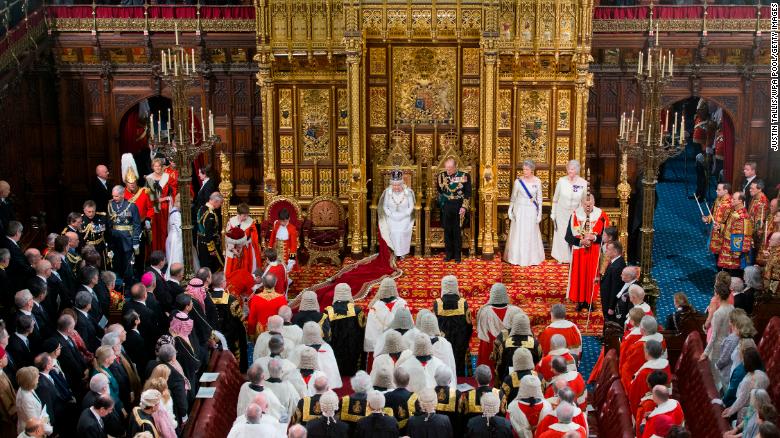 Queen Elizabeth II prepares to deliver her speech at the State Opening of Parliament in 2016.
Normally a Queen’s Speech happens once a year, but there has not been one since 2017 because May wanted Parliament to focus on passing her Brexit deal. Which didn’t work out very well.
This led to the longest parliamentary session in the UK’s history — 839 days — which formally ended on Tuesday when Parliament was suspended, or prorogued, to make way for Monday’s Queen’s Speech.

Monday’s ceremony will begin when the Yeomen of the Guard — effectively royal bodyguards — dressed in red Tudor uniforms, search the cellars with lamps to prevent a modern “Gunpowder Plot.” 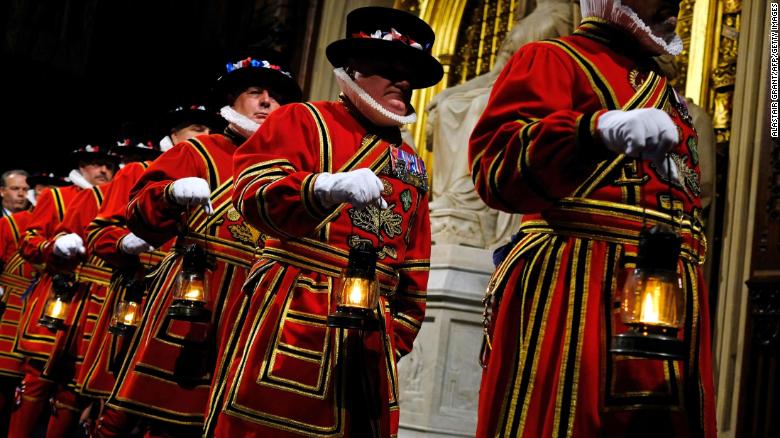 The Yeoman of the Guard take part in the traditional “ceremonial search” in the Houses of Parliament.

Quick history lesson: in the Gunpowder Plot of November 5, 1605, Guy Fawkes and four other conspirators tried (and failed) to blow up Parliament. The gang intended to detonate explosives on the day of the State Opening, killing King James I and the aristocracy of the House of Lords. The plotters were later executed.

The searching of the cellars is just one of many archaic traditions that live on. The Yeomen of the Guard — not to be confused with Beefeaters who guard the Tower of London — will later form a Guard of Honor for the Queen.

It’s all fun and games these days, but in a reminder of the historical violence between the Commons and the Crown, an MP will be held “hostage” in Buckingham Palace while the Queen is in Westminster.

This tradition, stemming from the time of King Charles I, is intended to ensure the monarch’s safe return.

Charles I was convicted of treason and beheaded on January 30, 1649 at the end of the Civil War between the monarchy and Parliament. A copy of his death warrant is still displayed in the Robing Room in Westminster, just in case any future monarchs get any ideas about interfering with Parliament.

The hostage is usually the Vice-Chamberlain of the Household (also a government whip), who is said to be kept well entertained before being released when the monarch returns to the palace.

The monarch’s “trusted guardians,” the Household Cavalry — consisting of two regiments: The Life Guards and The Blues and Royals — are the most senior of the regiments in the British Army and play an important role in the day.

They escort the Regalia — having been collected in secret some days earlier from the Jewel House at the Tower of London — in the Irish State Coach, an ornate, enclosed, four-horse-drawn carriage first used by Queen Victoria in 1852, to Westminster before lining the Sovereign’s Staircase with drawn swords in what is known as a “Staircase Party.”

Essentially, this is the Household Cavalry exercising their privilege of being the only troops allowed to bear arms within the Royal Palaces. 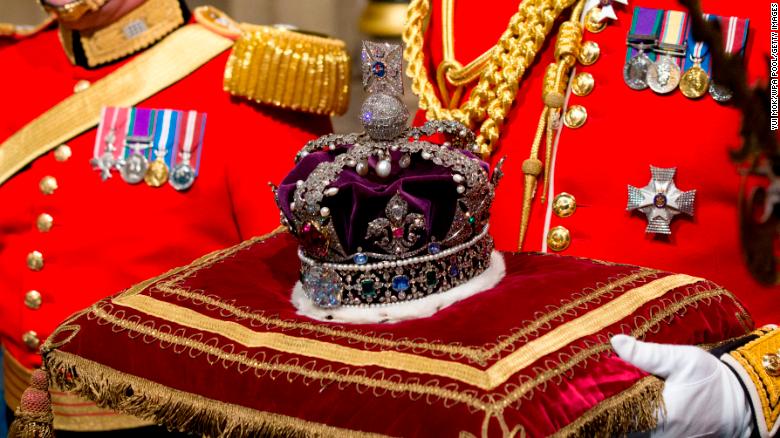 Queen Elizabeth II’s Imperial State Crown is carried through Norman Porch ahead of the State Opening of Parliament in 2016.
It’s important to note, the Queen can’t just enter Parliament from any entrance — she has her own Sovereign’s Entrance, and this is where her staircase is located.
The coach carrying the royal regalia — the Imperial State Crown, the Cap of Maintenance and the Great Sword of State — travels in front of the monarch and is placed on display in the Royal Gallery when it arrives at Westminster.
The dazzling Imperial State Crown, worn on formal occasions such as after a coronation, contains 2,868 diamonds, 17 sapphires, 11 emeralds, 269 pearls and 4 rubies, is normally then placed on the Queen’s head.
But in a BBC documentary, “The Coronation,” broadcast in 2018, she revealed she is now unable to look down to read speeches while wearing it because the crown is too heavy. “If you did, your neck would break and it would fall off,” she said.

The Queen will leave Buckingham Palace to travel to Westminster at 11 a.m. (6 a.m. ET) in the Diamond Jubilee State Coach. This is her newest coach, which was first used at the State Opening in 2014, and needs six horses to pull it on its route along The Mall, Horse Guards Parade, Whitehall and Parliament Street.
Built in Australia to celebrate the Diamond Jubilee — the 60th anniversary of Queen Elizabeth II’s accession to the throne — the coach is over 5 meters long and weighs over 3 tons. It has six hydraulic stabilizers, meaning it sways less so is more comfortable for the 93-year-old Queen to travel in. 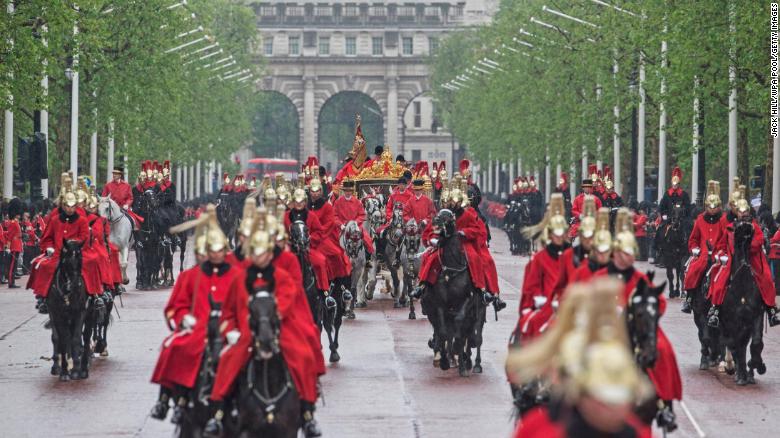 Prince Philip and Queen Elizabeth II travel by carriage to the State Opening of Parliament in 2016.
Escorting her will be Household Cavalry Mounted Regiment Troopers on 124 horses, groomed to a mirror shine.
Riding up front will be Queensbury an eight-year-old horse with a “lively” character.
The entire Royal Procession will be lined by more than 1,300 members of the armed forces and nearly 200 horses. Military bands will play hits such as the “Mary Poppins Medley” and the “Jurassic Park” theme tune.

At 11:15 a.m. (6:15 a.m. ET), the Queen will arrive and don the long crimson Robe of State in the aptly named Robing Room.
At this point, 41-gun salutes are fired by the King’s Troop in Hyde Park and at the Tower of London.
The Queen then leads the Royal Procession through the Royal Gallery, watched over by 600 guests, before entering the House of Lords where she will deliver her speech from the throne. The speech will be presented to her in a silk bag on bended knee by the Lord Chancellor. This ancient office of state is currently held by Robert Buckland. 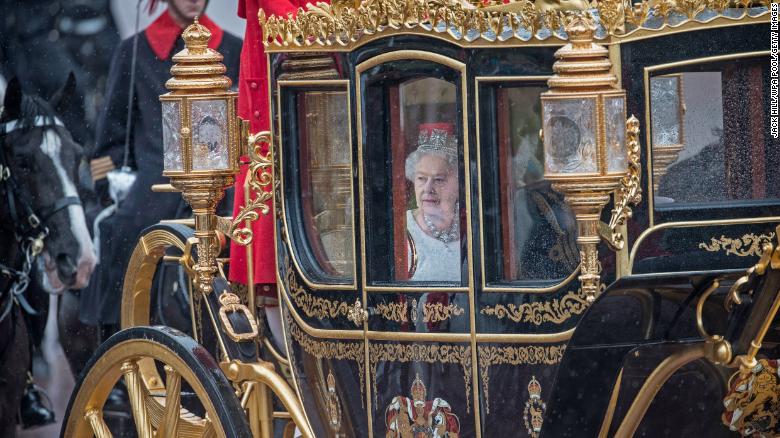 Duke of Edinburgh and Queen Elizabeth II in the Jubilee State Carriage in 2016.
Members of the Royal Procession include titles such as: Pages of Honour (there will be four of these, tasked with carrying the Queen’s train) and two ladies in waiting — Woman of the Bedchamber and Lady of the Bedchamber — the Queen’s personal assistants.
There will also be a “Gold Stick in Waiting,” a role dating back to Tudor times and was originally entrusted with the personal safety of the Sovereign. On Monday, the Gold Stick will be one of two Colonels in the Household Cavalry. The Prince of Wales and Duchess of Cornwall will also be part of the Royal Procession.
It’s not just the Queen who will be in a robe; members of the House of Lords will also wear ceremonial robes while judges of the High Court of Justice wear their wigs.

Once the Queen is on the throne, Black Rod, the traditional gatekeeper of the House of Lords, will summon members of the House of Commons to attend the monarch’s speech in the Lords. 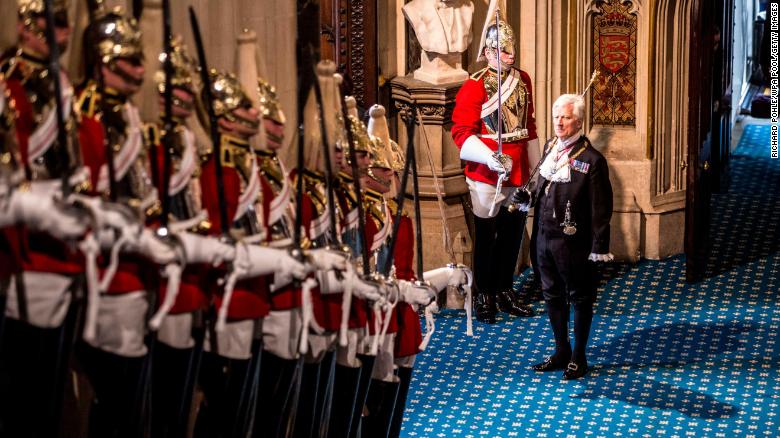 Black Rod waits at the bottom of the stairs before the arrival of Queen Elizabeth II.
To symbolize the Commons’ independence from the monarchy, the door is slammed in Black Rod’s face, and the holder of the office is required to bang three times before the door is opened. The 250 Members of the House of Commons then follow Black Rod back to the Lords Chamber, to stand at the opposite end to the Queen’s Throne.
The current Black Rod is Sarah Clarke — the first woman to take on the role, which can be traced back to 1348 and the time of King Edward III.

Once the Queen finishes her speech and leaves the Lords, her exit will be heralded by military trumpeters. A 41-gun salute once again sounds from the Tower of London and Her Majesty is home to Buckingham Palace shortly after midday.
Then the serious stuff begins again: a new parliamentary session starts and MPs return to the House of Commons to debate the content of the speech. The PM kicks off the debate, which can last for days before it is voted on. 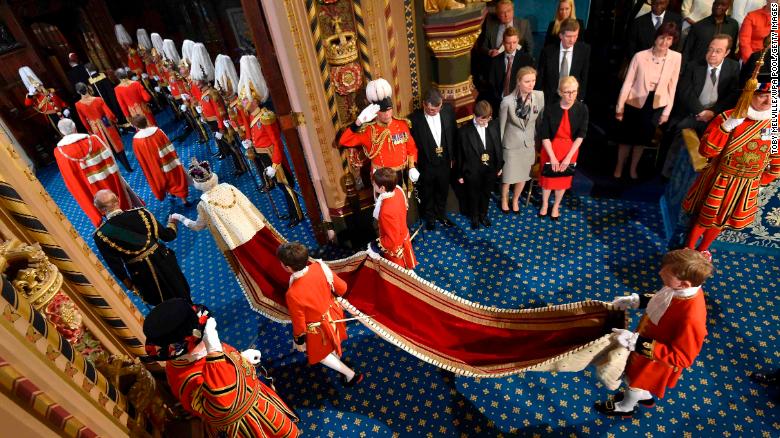 Queen Elizabeth II proceeds through the Royal Gallery before the State Opening of Parliament in 2016.
Historically speaking, a Prime Minister should have nothing to fear with a Queen’s Speech vote, but Johnson has lost seven consecutive House of Commons votes since becoming Prime Minister.
The last time a government lost such a vote was in January 1924, when Conservative leader Stanley Baldwin — held a King’s Speech, under George V, despite having no parliamentary majority. He subsequently resigned and Labour took over.
If Johnson, who also has no majority, loses the vote he will likely face further calls to resign and the opposition could table a vote of no confidence in his government, something they’ve been threatening to do for some time.

139 thoughts on “SVE NEWS & CNN Sharing Series – Hostage-taking, a gold stick and Black Rod. What to look out for in the Queen’s Speech”