(CNN)For President Donald Trump, a bad defeat is simply a spark for a future fight.

The President reacted with characteristic defiance to Congress’ repudiation of the national emergency declared in the cause of funding his border wall.
“VETO!” he tweeted, promising to crush the insubordination of lawmakers who had tried, where many others had failed, to rein in his quest for power and contempt for constitutional norms.
Trump’s crisis management reveals defining attributes of this most unique of political careers: The irrepressible energy of a force of nature personality, a refusal to accept a loss and an instinctive reflex to seek a new opening.
But it also showcases less positive traits, including his willingness to trample the truth for his own benefit, a selfish streak for which friendly foreign leaders sometimes pay the price and even a shockingly casual way of talking about political violence.
His full political arsenal was on display in a Trumpian masterclass of a photo-op in the Oval Office Thursday with Irish Prime Minister Leo Varadkar.
A historian 100 years hence could pull the tape of the 16-minute tour de force and learn everything they needed to know about the Trump presidency.
Trump’s behavior on Thursday offered pointers to how he will attempt to ride out political crosswinds using the unique political tools that made his late-in-life transition from business to Washington so successful.
Thursday’s rebuke from Congress came amid a spell that would have been disastrous for any conventional politician, as legal and congressional probes suggest tough challenges ahead as special counsel Robert Mueller’s final report looms. Unusually, it also included a slap from some Republicans who have been loath to challenge their leader in the first two years of his presidency.
Trump’s refusal to show weakness or humility in defeat allied with a brazen, relentless temperament and an indifference to shame helps explain why he is so hard to bring down.
Showing off sometimes diabolical but compelling political skills, Trump was audacious, provocative and spiteful. He made outrageous boasts about his own success and hinted at his acute sense of human nature and feral appreciation of weakness and discomfort in a political opponent.
Trump also showed his indifference, or rude disregard for the political plights of allied leaders, indulged his willingness to trade in falsehoods, and betrayed his obsessions with his predecessor President Barack Obama.

At Thursday’s White House meeting, Trump was also asked by a reporter about the freshest entrant in the Democratic White House race — former Texas Rep. Beto O’Rourke. He was ready. 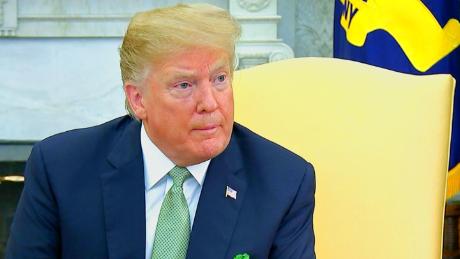 Trump makes fun of Beto O’Rourke’s hand movements 01:25
“Well, I think he’s got a lot of hand movement. I’ve never seen so much hand movement. I said is he crazy or is that just the way he acts.”
“Study it, I’m sure you’ll agree,” Trump told reporters.
The jab at O’Rourke was not just a throwaway. It was a return to the forensic targeting of political opponents that helped Trump dismantle the Republican primary field in 2016.
Mocking O’Rourke’s gestures might seem a frivolous at a time of national political angst and with a heavy duty policy debate already under way. But Trump is an expert at trivializing and belittling opponents, to detract from the gravity of their arguments and to feed the conservative media machine.
His diagnosis of Jeb Bush’s “low energy” four years ago established a narrative about the former Florida governor’s campaign that hinted at a grain of truth. The one-time GOP front-runner could never recover.

Trump vs. Brexit — and Obama

At one point in the meeting Tump, said he wasn’t going to “comment on Brexit,” but characteristically unable to constrain himself, could barely leave the topic alone.
At the start of his meeting, Trump welcomed Varadkar, and pointing out that his visitor was in a difficult position over Britain’s tortured attempts to complete its withdrawal from the European Union, which could harm Ireland’s peace and prosperity.
Trump also, as he often does, used his position to slyly shout out one of his businesses, in this case, a golf course in Ireland.
“I have a very warm spot for Doonbeg, I will tell you that and it just a great place really.”
While praising Ireland, Trump promptly switched to a characteristic boast about his own success, his management of the economy and how he held “all of the records … every single record for the stock market.”
Trump’s obsession with Obama — a defining characteristic — appeared like a nervous tick twice in his photo-op, twinned with a willingness to spout untruths.
First, he claimed that the former President had predicted in 2016 that British voters would reject leaving the European Union in a referendum while he had predicted they would vote to exit the bloc.
Obama did not bet on the outcome. But he did however warn Britons they would go “to the back of the queue” for a trade deal with the US if they left the EU.
Then Trump claimed — wrongly — that the EU was unwilling to “negotiate with the Obama administration” about trade. In fact, the previous administration sought to conclude a Transatlantic Trade and Investment Partnership — or TTIP — with Europe, though was unable to get the deal across the line. Trump’s own talks on trade with Europe have been inconclusive, after he threatened to spark a trade war.

Trump vs. his global counterparts

Trump’s comments on Brexit also illustrated the tendency of a President who admires dictators to throw allied leaders under the bus.
He criticized Prime Minister Theresa May, whose credibility has been shredded by parliamentary defeats.
“She didn’t listen to that and that’s fine, I mean, she’s got to do what she’s got to do,” said Trump, who was forced into a rare apology last year after hammering May’s Brexit strategy on the eve of meeting her in the UK.
He also repeated the untruth that he predicted the result of the British referendum when he flew into his Turnberry golf course in 2016. In fact, Trump arrived on the west coast of Scotland hours after the result of the referendum was announced.
Whether the President knows he’s lying, or has convinced himself of the truth of his alternative reality, is unclear. But his continued use of a discredited fact is a core element of his political technique.
Trump also put Varadkar on the spot — asking him to comment on Brexit, threatening to expose their differences on the issue.
Then Trump interrupted Varadkar, who watched with a bemused look as the President savaged the EU alongside one of its national leaders.
“The European Union treats us very, very unfairly,” Trump said, in a screed that included another characteristic political device — a flagrant threat.
“If they don’t talk to us, we’re going to do something that’s going to be very severe economically,” Trump said. “We’re going to tariff a lot of their products coming in.”
Most leaders go out of their way to avoid antagonizing their counterparts and wading into their delicate domestic politics.
Not Trump.
The exchange also revealed another one of Trump’s political tools: his fervent effort to inject an appeal to his base — in this case on a signature issue, trade — into almost every political situation.

Trump also launched a mini-campaign rally, seizing on the Senate vote undoing his emergency declaration, to spell out his hardline policies on immigration and the wall — always with an eye on his most loyal voters.
In an interview published by Breitbart News this week, Trump revealed another aspect of his character — a sense that he is being persecuted unfairly — that helps him identify with voters who feel neglected by political elites.
Complaining about Democratic investigations, the President made a jarring comment that hinted at the possibility of political violence.
“I can tell you I have the support of the police, the support of the military, the support of the Bikers for Trump — I have the tough people, but they don’t play it tough — until they go to a certain point, and then it would be very bad, very bad,” Trump told the conservative website.
Trump’s incessant appeals for his base are undeniably effective.

One Republican, Sen. Thom Tillis, of North Carolina, made an 11th hour switch of his vote on the declaration of national emergency, falling into line behind the President.

A top GOP official in North Carolina told CNN’s Jim Acosta that Tillis was under fierce pressure ahead of a potential primary challenge next year.
The official said, Tillis is “getting hit hard in the state.”